An Indian Catholic priest delivers his sermon during a Mass in the southern Indian state of Kerala, in this file photo. (Photo by AFP)

At least 1,500 Catholics staged a protest on Aug. 20 against the demolition of a cross that stood at a pilgrim site in a forested area near Vithura, a village in India's southern Kerala state.

It is thought the 8-meter tall concrete cross was destroyed on Aug. 18, but it is not yet known who was responsible. Local Catholics from Neyyatinkara Diocese had installed the cross.Several Catholics accused forest officials of destroying the cross, saying the officials were threatened with disciplinary action for allowing the construction of the cross.
Donate to UCA News with a small contribution of your choice

The diocese's vicar-general, Father Christudas, said the protest would continue until a new cross is installed.

A church delegation from Neyyattinkara Diocese met Chief Minister Pinarayi Vijayan, who vowed to arrest those responsible and would look into having the cross replaced. 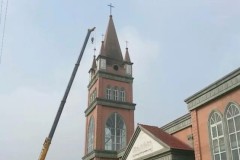