Sanjay Tirkey says being a catechist is a vocation. (Photo supplied)

Indian Catholics have welcomed the news that Pope Francis has created a lay ministry to encourage greater participation of men and women in spreading the Catholic faith.

The papal letter Antiquum Ministerium (Ancient Ministry) was released on May 11 in eight languages.

“We wholeheartedly thank the Holy Father and welcome the gesture by him for recognizing our foot soldiers who are the actual personnel helping in evangelization and spreading the Good News of the Church,” Bishop Gerald John Mathias of Lucknow told UCA News.

Bishop Mathias, a member of the Catholic Bishops’ Conference of India’s laity commission, said that “by constituting the ministry of catechist, Pope Francis has given them full authority to go out without any hindrances and proclaim the Gospel.”

“Lay catechists are the people who actually bring the first message of Christianity to the ordinary people before the priest or religious people come and carry forward the works done by the catechists,” the prelate said.

Pope Francis said the new ministry would “emphasize even more the missionary commitment proper to every baptized person and in a secular manner avoiding any clericalization.”

Lay catechists are paid the very minimum and in some places they are not even paid, but acknowledging their work in the Church will at least refresh their energy to work religiously and give them inner satisfaction

Father Manikya Raju, secretary of the Commission for Catechetics in the Archdiocese of Delhi, said the new ministry will give lay catechists a morale boost for their hard work.

“Priests and religious nuns also engage in catechist work but they have limitations in far-flung areas in transport, language and culture where the local catechists become handy,” he said.

Sanjay Tirkey, a catechist in the Archdiocese of Ranchi, told UCA News that “we are at the forefront and have engaged in evangelization work for years, but we are hardly recognized by the Church and faithful, so Pope Francis’ reorganization of lay catechists will give us a status in the Church.”

He added: “Lay catechists are paid the very minimum and in some places they are not even paid, but acknowledging their work in the Church will at least refresh their energy to work religiously and give them inner satisfaction. 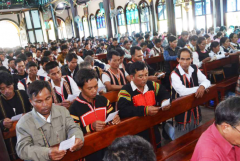 “It is not such an easy job as people presume. In some places catechists even face life-threatening reactions from people who do not want to talk about Christianity. Some have even been killed for their faith.

“Being a lay catechist is a vocation. It comes from God. The job is quite challenging but satisfying.”