Country must learn from mistakes of other nations that led to social and economic ruin, says All India Catholic Union 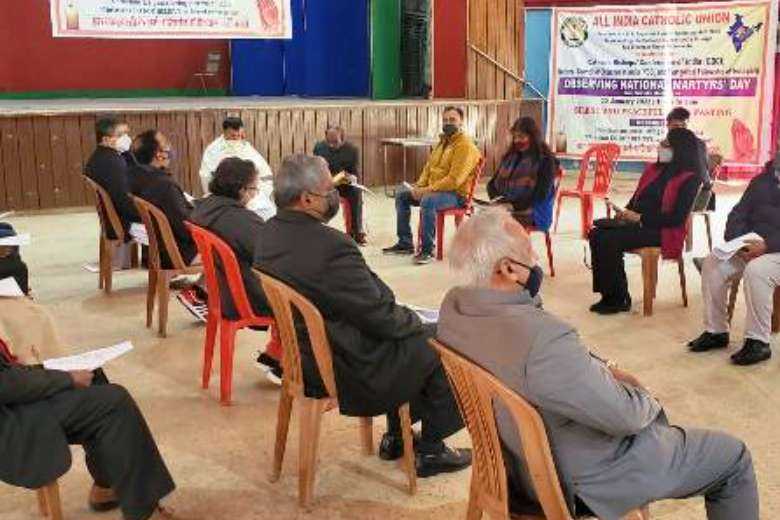 Christians from different denominations participate in a prayer and fast to observe a martyrs' day called by the All India Catholic Union in New Delhi on Jan. 30. (Photo: Bijay Kumar Minj/UCA News)

Targeted hate against religious minorities has brought India to a boil, according to the All India Catholic Union (AICU), the largest laity forum in Asia.

The 103-year-old Catholic organization said the rising hate wave in recent months if left unchecked now may do untold damage to national peace and unity.

Its May 23 statement was in response to Karnataka state enforcing an anti-conversion law though an ordinance signed by the state governor after it failed to pass through a vote in the state council or upper house.

He said so-called "freedom of religion" laws have criminalized interfaith marriages on the pretext of curbing conversions by force or by fraud.

“These anti-conversion laws ... empowered hoodlums, vigilantes and political leaders in villages, small towns and districts to terrorize minority communities, their clergy and their institutions"

D'Cunha said that “nothing good can come of digging into history to relive its horrors, or to scour its wounds till they again bleed. We must learn from mistakes other nations have made, which have ruined their economies and social fabric and brought them to the brink more than once.”

Political and religious leaders must act in concert to strengthen peace and amity. They cannot look away from their responsibility, he added.

Along with other religious groups and civil society movements, AICU will challenge anti-conversion laws that go against the letter and spirit of the constitution and trigger targeted violence, the statement said.

“These anti-conversion laws, the most recent of which have been in Uttar Pradesh, Karnataka and Haryana, empowered hoodlums, vigilantes and political leaders in villages, small towns and districts to terrorize minority communities, their clergy and their institutions,” it added.

In 2019, AICU celebrated 100 years since its founding in then Madras city and is active in propagating the church's social teachings, which have evolved over the decades to equip people to play a meaningful role in hte church, community and secular society.

AICU is a federal body recognized as a representative of the laity by the Catholic Bishops’ Conference of India, the national umbrella organization of the three streams of the Catholic Church in India — the Latin Church, Syro-Malabar Church and Syro-Malankara Church.