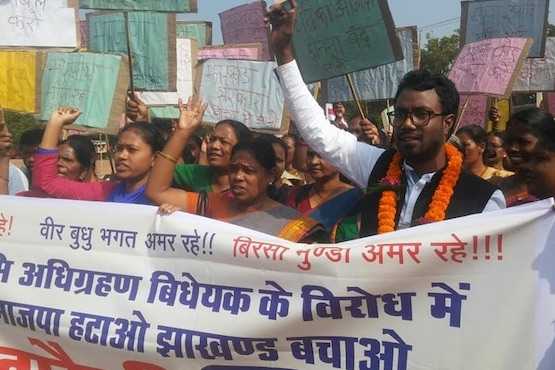 Indigenous people take part in a protest march in Ranchi on Oct. 31 against the recent Jharkhand government’s bill on land and anti-conversion law, which they say works against their interests. (Photo supplied)

India’s tribal dominated Jharkhand state has banned people who have more than two children from contesting local body elections, which the local cardinal sees as a way to politically side-line indigenous people who traditionally have large families.

"It is a human rights violation," said Cardinal Telesphore Toppo of Ranchi who is based in the state capital. He said it was ironic that Jharkhand was created 17 years ago to ensure the advancement of indigenous people but now works against their interest.

"Restricting our people, who generally have more than two children, to contest the election is blocking our people from coming up in life," said the local cardinal from Oraon tribe.

"The government wants to demoralise and suppress tribal people and crush any emerging leadership," said the first tribal cardinal from Asia.

Anabel Benjamin Bara, who teaches at the Jesuit-run Xavier School of Management, Jamshedpur, wondered "why the new decision was only about local body elections. If the government is clear, this is a step to discourage population growth, it should also include state and national elections," he said.

"But the government knows that tribals have more than two children. Their concern is only taking over tribal leadership from local bodies. It is a conspiracy to stop the voices of the tribal people," said Bara, also a tribal leader.

Bara, a Catholic, said the BJP government "was never in favor of the tribal people, especially Christian tribals. "First they tried to take over tribal lands, then they enacted the anti-conversion bill. It is all part of the game to make tribal people powerless and submissive," Bara said.

In September, the state government passed the controversial Jharkhand Freedom of Religion Act 2017 which criminalizes religious conversion by use of force or allurement or by fraudulent means. It also stipulates that those wanting to convert should seek government permission. Violators face jail terms and fines.

Hindu nationalists misinterpret Christian missionary services of health care and education as allurement and fraudulent means for conversions as they accuse missionaries of converting local people to Christianity.

Earlier, the government wanted to amend the law for removing the legal protection of tribal people's rights to their land and empowering the government to seize their farmland for developmental purposes.

Tribal people, including church groups and Cardinal Toppo, had campaigned against the amendments ever since the state legislature passed them in November.

Mineral-rich Jharkhand has some 9 million tribal people, who form 26 percent of the state’s 33 million population. About 1.5 million people in the state are Christians, at least half of them Catholics.