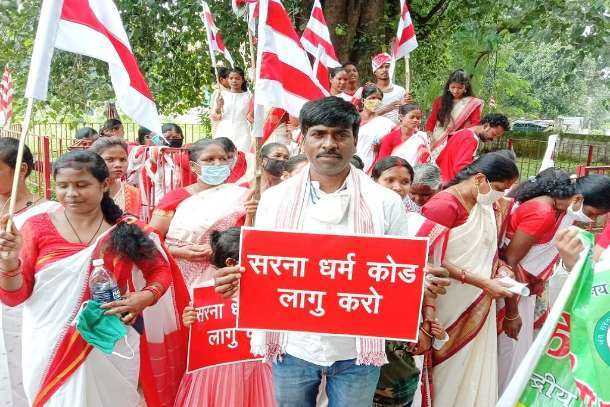 Tribal people demand recognition of the Sarna religion during a rally in Ranchi, state capital of Jharkhand, on Sept. 20. (Photo supplied)

Catholic bishops in the eastern Indian state of Jharkhand have urged chief minister Hemant Soren to legislate and recognize the Sarna or tribal religion.

In a letter on Sept. 19, bishops from Ranchi Archdiocese reminded Soren that tribal people had been given special status under the constitution.

“Articles 25, 29 and 342 of the Indian constitution guarantee the rights of the tribal community to their language, religion, culture and a separate identity. Therefore, they must be provided a separate Sarna code,” the letter, signed by Archbishop Felix Toppo of Ranchi, noted.

“We also demand the Jharkhand government pass a bill during the ongoing assembly session in this regard to safeguard tribal identity and send the proposal to the federal government to formally press for inclusion of the Sarna code in the census due in 2021.”

The bishops also urged the Jharkhand government to pass a resolution not to implement the National Register of Citizens in the state until such time the federal government recognizes the Sarna code.

Meanwhile, a major rally calling for tribal rights was held in Ranchi, state capital of Jharkhand, on Sept. 20.

“We are campaigning for the cause of the Sarna code and our people are going from village to village to make people understand the importance of this campaign,” Santosh Tirkey, general secretary of Ranchi’s Kendriya Sarna Samiti, told UCA News.

“There are around 150 million followers of Sarna in India and we have been demanding recognition of the Sarna religion for several years. Many politicians promise to do so during the election campaign but later they forget.”

Ratan Tirkey, a member of the Tribal Advisory Committee of Jharkhand, told UCA News that the Sarna code would enable people to register as tribal people when the census is conducted in 2021 and in the meantime it will also guarantee protection of tribal identity, language and culture.

“Sarna tribals are nature worshippers. They revere the forests, mountains and rivers — they do not belong to any religious sect. They have demanded a separate code in the census since the 1990s,” he said.

The 1951 census included a ninth column for religion labelled "Tribe," which was later removed. Due to its removal, the tribal population embraced different religions, causing a major loss to the community.

After 1951, in addition to Hindu, Muslim, Sikh, Christian, Jain and Buddhist, there was a column titled “Others,” which was removed in 2011.