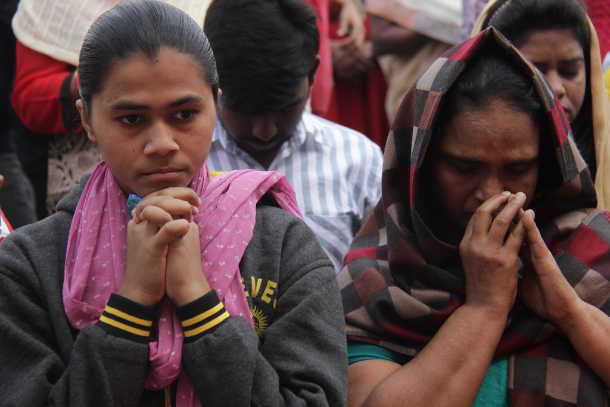 Catholics of Delhi Archdiocese pray during the Feast of Christ the King in New Delhi on Nov. 24, 2018. Catholics in Tamil Nadu and Karnataka are concerned that national election voting will fall on Maundy Thursday. (Photo by Bijay Kumar Minj/ucanews.com)

Catholic bishops have urged authorities to change the April 18 date for parliamentary elections in India’s Karnataka and Tamil Nadu states as Maundy Thursday falls on that day.

The federal Election Commission has announced a seven-phase schedule for national elections running from April 11 to May 19. While all 39 parliamentary constituencies of Tamil Nadu are scheduled to go to the polls on April 18, voting in Karnataka is set for April 18 and 23.

The poll date falls in Holy Week and is one of the holiest and important days for Catholics as well as the Christian community, Archbishop Antony Pappusamy of Madurai, president of Tamil Nadu Bishops’ Council, told ucanews.com.

The archbishop on March 11 wrote to Tamil Nadu’s chief electoral officer to ask for a change of date to free up Catholics to observe the day appropriately.

Archbishop Peter Machado of Bangalore has written to the Election Commission to ask it to move the election to any date after Easter Week.

During long liturgical ceremonies on Maundy Thursday, the day before Good Friday, Catholics commemorate the Eucharist and enact the Biblical narration of Jesus washing the feet of his disciples.

Hundreds of Catholics serving in government departments have been put on election duty and will not be able to join these important ceremonies, Archbishop Pappusamy’s letter said.

Archbishop Pappusamy said his letter represents the sentiments of people and he is consulting community leaders about the next steps. “So far we have not received any response from the authorities,” he told ucanews.com on March 14.

People on election duty would miss Maundy Thursday services, he said. Moreover, when schools become polling stations, it would be difficult to use the premises for services.

“The state election commissioner’s office must have been in consultation with political parties and not religious leaders,” Father Raj said.

He recalled that in 1980, when the state election clashed with Holy Week, it was brought to the attention of former Tamil Nadu chief minister M.G. Ramachandran, who immediately postponed the poll.