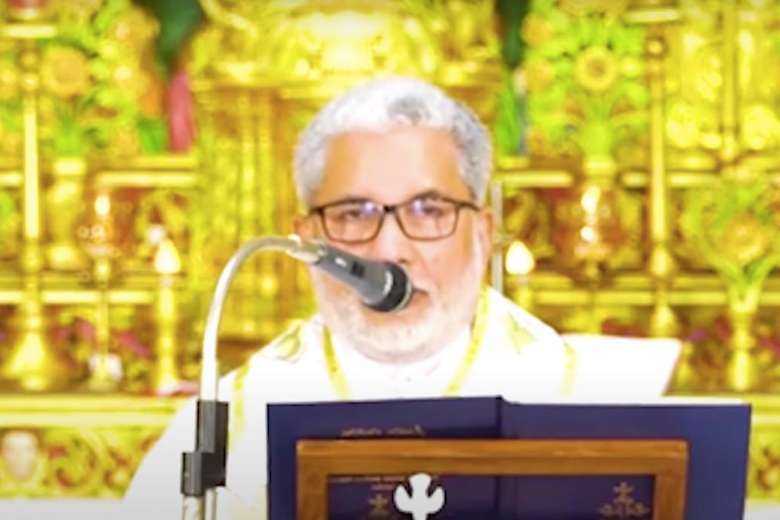 Bishop Joseph Kallarangattu of Pala giving his homily at the nativity celebration of Mother Mary on Sept. 8 in a church in Kerala's Palai diocese. (Photo: supplied)

A Catholic bishop’s controversial remarks cautioning his people against the so-called “narcotic jihad, love jihad” has snowballed into a major controversy in the southern Indian state of Kerala.

Bishop Joseph Kallarangattu of Pala during his homily at the nativity celebration of Mother Mary on Sept. 8 had quoted recent statements of former state police chief Loknath Behera and said Kerala had become a recruiting center of Islamic terrorists.

Muslim terrorists, he said, want to “promote their religion” and to see “the end of non-Muslims” for which they used “loved jihad” and “narcotic jihad.”

“They have realized that in a nation like India, taking up weapons and destroying others isn't easy and thus, they're using other means,” he further said urging Catholics to be aware of such elements that might destroy their lives and their families.

The bishop also asked Catholic families to protect their girls from love jihad, a term used to accuse young Muslim men of feigning love to marry and convert non-Muslim women.

Soon after the videos of his homily went viral on social media, more than a thousand Muslim men marched on the streets and attempted to storm the bishop’s house in Pala town in Kottayam district.

Police, however, foiled their attempt. The protesting mob later blocked the road and demanded action against the prelate for attempting to create communal discord in Kerala.

Pala is Christian-dominated and various Christian organizations came out in support of the bishop in reaction to the protests. Hindu groups supported by the pro-Hindu Bharatiya Janata Party (BJP) also stepped in to support saying the bishop had said nothing wrong.

Pala town and municipality area together have some 23,000 people, 64 percent of them Christians and 34 percent Hindus. Muslims are negligible in the area.

State BJP general secretary George Kurian wrote to federal home minister Amit Shah seeking protection for Bishop Kallarangattu. “Some extremists had marched to the bishop's home and threatened physical harm to him,” he claimed in the letter.

The use of narcotics is not restricted to one religion but affects the entire society and his government was taking steps to contain the menace, he added.

Meanwhile, the Kerala Catholic Bishops Council (KCBC) has extended its support to the prelate.

Father Jacob G Palackappilly, deputy secretary-general of KCBC, said the bishop's statement was not against any religion but against a serious issue that is confronting society. It needs to be seriously discussed, he said.

The Catholic Church, the bishops' council said, aimed at “communal harmony and peace and not hatred and divide.

Bishop Kallarangattu had noted that it was Christian and Hindu girls from the state who had been converted and sent to the terrorist camps in Afghanistan recently.

The matter should be examined seriously, he added.

The bishop said politicians, leaders and journalists, who try to deny this fact, may have their own vested interests. “It is like closing the eyes and saying darkness is everywhere,” he added.

Bishop Kallarangattu had urged his people to be aware of this danger and ensure their families and children are protected from this danger.

ZACHARY URAM
I support this bishop! Muslims are using love jihad and narcotics against Christian and Hindu vulnerable.
Reply