The proposed K-Rail project in Kerala state is likely to displace over 20,000 families to acquire their ancestral properties 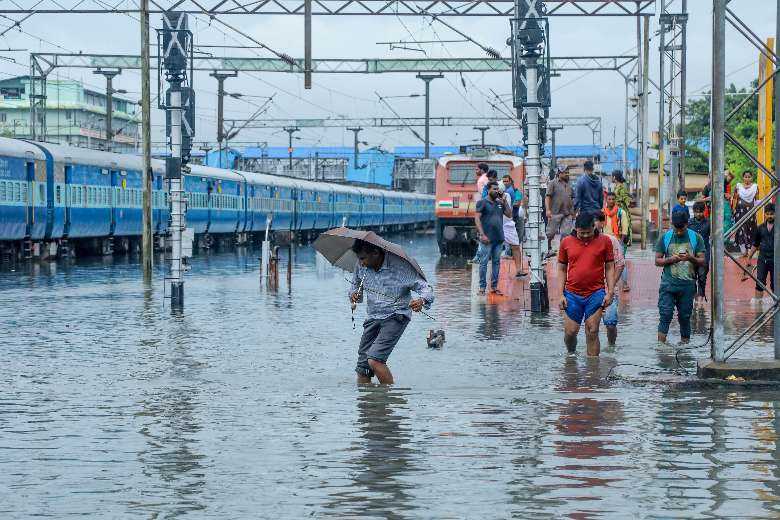 Passengers walk on waterlogged rail tracks at Ernakulam Junction station in Kochi in the southern Indian state of Kerala on Oct. 21, 2019. (Photo: AFP)

The Catholic Church has urged the communist-led government in the southern Indian state of Kerala to clear the air over its proposed rail project amid widespread opposition from people.

“The government cannot totally ignore the protests and growing criticism against its semi-high speed rail corridor or Silver Line Project connecting one end of the state to the other,” said a statement issued by Kerala's bishops on March 29.

The prelates want the government to decide the feasibility of the rail project in the interests of people who have serious suspicions about it. Critics of the project fear it may cause environmental damage and not benefit the common man.

“We are not against any welfare project but people should be taken into confidence before starting it,” said Father Jacob G. Palackappilly, deputy secretary-general and spokesperson of the Kerala Catholic Bishops' Council.

He said the Church’s concern was for people’s welfare. “We don’t want them to suffer and therefore the government should clear all doubts. Our past experience is that many people were displaced in the name of welfare projects and are yet to be rehabilitated,” Father Palackappilly told UCA News on March 29.

The bishops' statement comes a day after India’s Supreme Court refused to interfere with the land survey and social impact assessment process of the project.

It would displace over 20,000 families, whose rehabilitation would cost the state exchequer heavily, raising the debt burden on its people

“We don’t want to stall any project at all, we are very clear,” said a bench of Justice M.R. Shah and Justice B.V. Nagarathana while dismissing an appeal challenging an earlier order of Kerala High Court allowing the government to proceed with the project.

The Kerala Rail Development Corporation (K-Rail), a joint venture between the Indian Railways and the state government, was floated eight years ago to augment the public transport system in the state.

The Silver Line project would require around 1,383 hectares of land, of which 1,198 hectares are in the possession of private individuals who don’t want to be displaced from it.

The opposition parties under the Congress-led United Democratic Front (UDF) have called the project “unviable and disastrous” for the state. It would displace over 20,000 families, whose rehabilitation would cost the state exchequer heavily, raising the debt burden on its people.

But Chief Minister Pinarayi Vijayan called the initiative “inevitable for the infrastructure development of the state,” underlining the need for reducing traffic congestion and accidents across the state.

Church leaders and common people are not convinced and are organizing public protests against the project, clashing with K-Rail officials and police during the land survey operations underway at many places.