More than 3,000 teachers in state-aided schools are not paid salaries in the five years 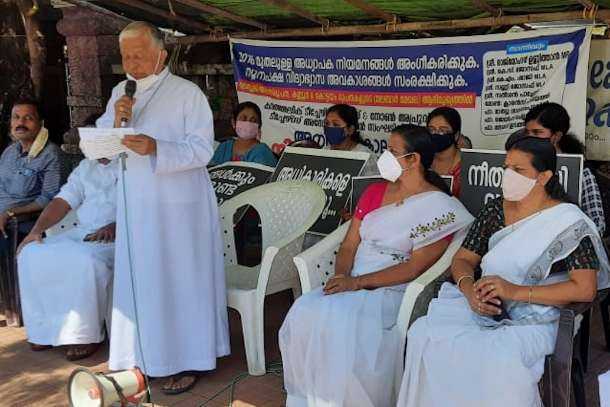 Bishop Alex Vadakumthala of Kannur addressing a protest meeting before the Kannur district administration office on Oct. 20, as part of a state-wide strike launched by the Kerala Catholic Bishops' Council to protect their rights to manage educational institutions. (Photo: Supplied)

Three Catholic bishops sat on a day-long hunger strike in front of the state secretariat in Kerala on Oct. 20, accusing the communist-led provincial government of denying the constitutional rights meant for Christian educational institutions.

The government "curtails our rights as a religious minority to run education institutions through arbitrary orders and amendments to the existing laws," said Archbishop Maria Calist Soosa Pakiam of Trivandrum, who inaugurated the strike.

Besides the bishops, two other Catholic officials joined the strike to attract public attention to what they say the government's encroachment upon their constitutional rights to establish and run educational institutions.

Archbishop Pakiam said more than 3,000 teachers in state-aided schools under Church's management were not paid salaries in the five years. He said denying salaries in the time of the Covid-19 pandemic was an "act of cruelty."

He said the bishops resorted to public protest after the state government failed to keep its several assurances to them.

Archbishop Pakiam said the protest aims to seek "no special favors from the state. It is to ensure our constitutional rights," he said.

Of the state's 13,000 schools, Christian churches run some 5,000. More than half of them are entitled to get government funding to pay salaries to a certain number of teachers.

Father Charles Leon, the secretary of the KCBC education commission, told UCA News that it was the start of the state-wide protest.

"It is not a one-day affair. It is an indefinite protest," said the priest, who organized a simultaneous protest program in all the 14 districts headquarters in the state. In similar programs, five persons each sat on a hunger strike.

The state government was also "trying to meddle in the appointment of teachers in the state-aided schools," said Father Leon, whose commission covers all 32 Catholic dioceses in the state.

The government categorized some 4,000 teachers, mostly of state-run schools, as "protected teachers" aiming to save their jobs when the state closed down its schools or reduced their size because of students' shortage.

"The government on the plea of resettling the protected teachers tried to take over the right to appointment 50 percent of teaching staff in the church-managed schools and other such minority schools," Father Leon explained.

"We were told then that it was a one-time settlement. But now the government wants to continue to appoint of 50 teachers in our state-aided schools in complete breach of constitutional provisions," he lamented.

Cardinal Baselios Cleemis Catholicos, head of the Syro-Malankara Catholic Church, said the constitution gives minority schools the right to appoint teachers. But the communist government had stalled the appointments in the past five years.

"It is a gross injustice," he said while addressing the concluding meet of the day-long strike.

Christians form 18.38 percent of the 33 million population in Kerala state but are credited for introducing and propagating Western education.

In comparison to Kerala, Christians are a minuscule minority forming only 2.3 percent of India's 1.3 billion population. Hindus make up more than 80 percent of the population.