Multi-billion-dollar port endangers the future of thousands of fishermen in Kerala, they say 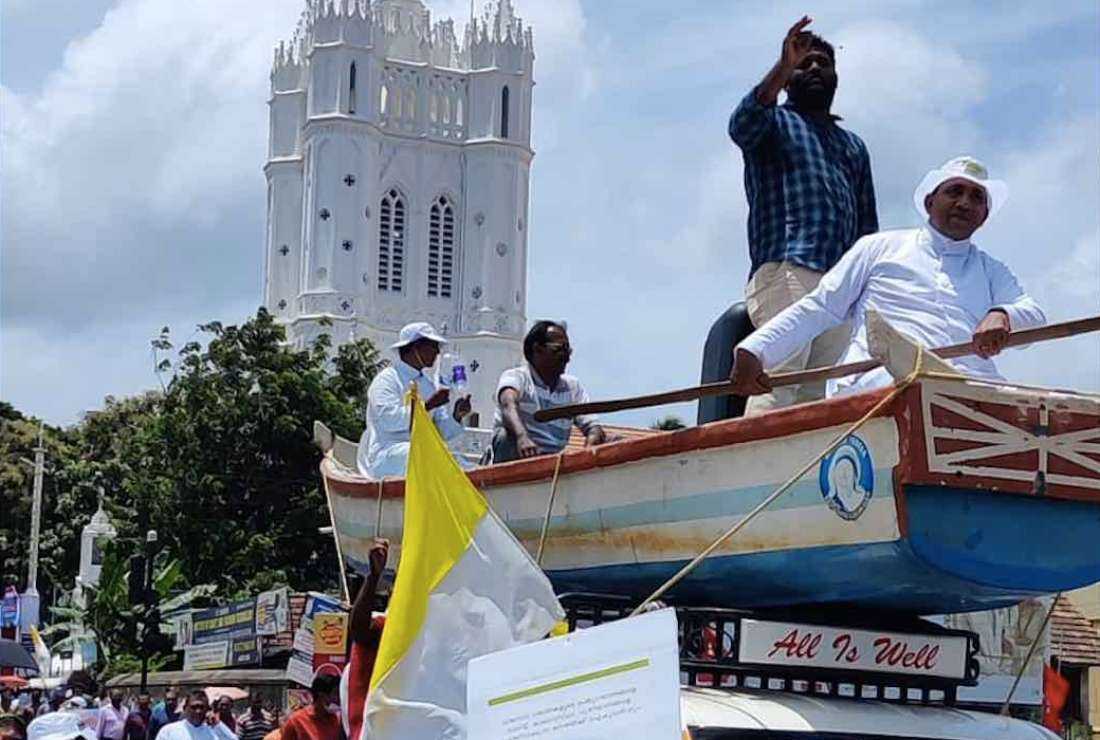 Catholic priests sit on a boat atop a truck as part of a protest in Kerala’s state capital Thiruvananthapuram on Aug. 10  against a multi-billion-dollar port project which they say endangers the livelihoods of thousands of fishermen. (Photo: supplied)

Catholics in southern India are up in arms over a multi-billion-dollar port project which they say endangers the livelihoods of thousands of fishermen.

“We appeal to the government to immediately stop construction work,” retired Archbishop Soosa Pakiam of Trivandrum said while addressing the gathering.

Archbishop Thomas Netto of Trivandrumam, Auxiliary Bishop Christudas Rajappan, as well as priests and nuns from the archdiocese, protested at the state assembly with fishing gear, including traditional boats and fishing nets.

Archbishop Pakiam described the rally as a “dhramyuddham” (war for righteousness) and appealed to the government to stop the port construction and pay promised compensation to displaced people and rehabilitate those who had lost their homes.

He also demanded a fresh feasibility study on the environmental implications of the megaproject on a coastal area in Kerala where millions live.

Quoting several experts’ findings, the prelate said the port is a major threat to the local environment and inhabitants.

"They made promises to settle the issue, but never acted on their promises that now look hollow"

He said when the project was initiated, people protested against it and the government promised to take care of all losses suffered by people affected by it and earmarked several billion rupees.

A government order was also issued to this effect, but close to 500 fishing families are still living in makeshift accommodation and have not been compensated or rehabilitated, Archbishop Pakiam said.

“We have on several occasions told government officials, ministers and others about their plight. They made promises to settle the issue, but never acted on their promises that now look hollow,” he said.

“When we asked for a seawall to check erosion the government made an excuse, saying there was no stone available, but for the private port there were no such issues, highlighting the government’s double standards.”

The prelate said the protest will continue until the government rehabilitates the fisher folk with dignity.

Archbishop Netto said they were forced to protest after the government ignored appeals by the people for rehabilitation. The prelate also vowed to continue the protest until their demands were met.

"We bishops and priests are out to fight for them"

Auxiliary Bishop Christudas Rajappan said the fisher people resorted to protests as the government had not even bothered to establish any dialogue with them.

The Church launched an indefinite protest on July 20 to highlight the plight of the fishermen, but so far no government agency has tried to establish contact with the protesters, he said.

Bishop Rajappan asked the government whether the fishermen had any right to celebrate India's 75th Independence Day on Aug. 15 as they were being forced to lead a squalid life in temporary shelters.

“Our people are denied even basic facilities and hence, we bishops and priests are out to fight for them,” he added.

Bishop Rajappan also appealed to the government to resettle families, failing which the protest will be intensified.

“Our problem is at least seven years old and the government is not ready to address the issue,” said Father Sabbas Ignatius, a parish priest.

"Thousands of families will be uprooted from their homes"

“Close to 400 families lost their homes due to coastal erosion after the private port construction started,” Father Ignatius told UCA News on Aug. 11.

The mammoth port project started in 2015 and was expected to be completed within four years, but frequent natural calamities such as rain, floods and the Covid-19 pandemic delayed it.

“More and more people are losing their land, houses and means of employment as the port construction progresses,” the priest said.

“If this situation continues, thousands of families will be uprooted from their homes and left jobless. The government is obliged to save their lives and livelihoods.”