Kerala plan would have impoverished families already reeling under the burden of Covid-19, they say 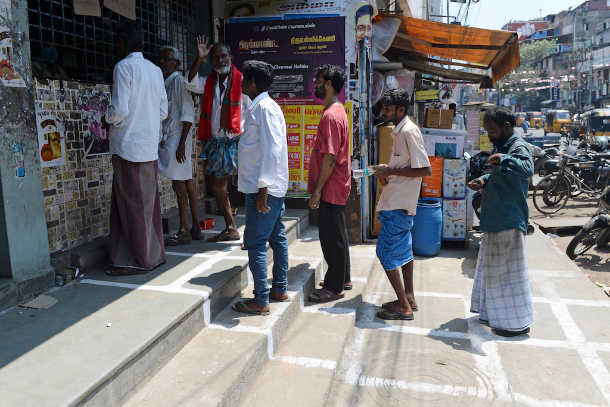 Customers stand in a queue on a social distancing marker drawn outside a liquor shop amid concerns over the spread of the coronavirus in the Indian city of Chennai on March 21. (Photo: Arun Sankar/AFP)

Kerala bishops have hailed the state's High Court banning a state government move to deliver alcohol to the homes of alcoholics during India's Covid-19 lockdown.

The Kerala Catholic Bishops’ Conference (KCBC) “wholeheartedly welcomes the order,” said Bishop Yoohanon Mar Theodosius of Muvattupuzha, who heads the anti-liquor cell of the bishops’ body in the southern state.

The state's top court on April 2 ruled against the state government’s decision to allow alcoholics with withdrawal symptoms to buy alcohol online with a doctor’s prescription. The government also asked the Excise Department to arrange home delivery of alcohol purchases.

The communist-led state government took the decision after six persons committed suicide in Kerala in the first week of the 21-day nationwide lockdown that started at midnight on March 24.

The six deaths stood in contrast to the two lives that the Covid-19 pandemic has so far claimed in the state.

The lockdown meant the closure of all non-essential shops and business, which included alcohol outlets managed by the state government.

The government decision “is a recipe for disaster,” Justice Nambiar remarked while passing the interim order. He added there was no medical literature to back the government’s move.

Doctors in their submissions argued that prescribing alcohol as a medicine would go against medical ethics. They could only recommend alcoholics to undergo de-addiction treatment, they argued.

The court also sought to know from the state government's counsel “how alcohol could be used as a remedy for withdrawal symptoms.”

Bishop Theodosius told UCA News on April 3 that the court order was “a direct intervention of God. The collective social consciousness of the medical fraternity, socially aware citizens and others inspired the High Court to pass such an order,” he said.

“A big disaster has been averted with this court order,” Bishop Theodosius noted.

The government move would have caused more financial burdens to families who are already reeling under the burden of the pandemic, he said.

“The lockdown has proved that people can live without alcohol and the government and society should rise to the occasion to eliminate the drinking habit,” Bishop Theodosius said.

He also wanted civil society to fight the menace of alcoholism in the state of 33 million people, which has the highest per capita alcohol consumption in India.

People in the state drink an average of eight liters of alcohol a year, some two liters more than the national average.