Indian national flag as seen the city center of New Delhi, Indian capital. India's bishops have denounced reports that some Christian youth have burned an Indian flag and a Hindu idol in Christian majority Mizoram state in northeastern India. (Photo by IANS)

Indian Catholic bishops have denounced youths who burned the national flag and an image of a Hindu deity in Mizoram state, northeast India.

"Those who have committed these acts cannot and should not profess to be Christians," the Indian bishops' conference said in an Oct. 6 media release signed by secretary general Bishop Theodore Mascarenhas.

A group of youths in Lunglei district, holding the cross and Bible, poured petrol on the image of Hindu's elephant headed deity Ganesha and set it on fire. They also burnt the national flag they were holding.

According to media reports, one of them was heard saying that Mizoram is the land of Jesus and they would not allow their land to be converted to Hinduism.

Police have arrested six youths suspected of being involved.

The incident reportedly occurred on Sept. 21 and only came to the bishops' notice when national media began to report it much later, Bishop Mascarenhas said.

"We must stand up against all sorts of fundamentalism, no matter from which religion it comes from," he told ucanews.com.

The bishop added that, according to information received, those involved belong to a neo-Christian sect.

Expressing shock at the incident, the bishops' conference said that the Catholic Church, along with other Christian churches, always stood for national unity, peace and harmony among all peoples.

"We are shocked that anyone could show disrespect to members of another religion in the name of Christ," the release said. 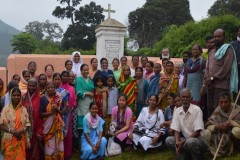 Stressing that Christianity is meant to build bridges of peace between people, the bishops said Christianity should not be used to spread hatred.

Mizoram, sandwiched between Bangladesh and Myanmar, is one of India's only three Christian-majority states. Christians form close to 90 percent of the state's 1.1 million people. Some 8 percent are Buddhists, making Hindus a tiny minority of 2.7 percent.

The population contrasts with a national average of 80 percent Hindus and 2.3 percent Christians. In Meghalaya and Nagaland states, also in northeastern India, Christians are close to 90 percent.

Hindu groups have accused Christian missionaries of trying to turn India into a majority Christian country modelled on the three northeastern states.

Hindu groups have also accused Christians in the past of making derogatory comments about Hindu gods and desecrating their images.

He added that no Vishwa Hindu Parishad leaders had said anything derogatory about Jesus or Mary.

"We do not do it because we respect other religions," Jain said.

"But these Christian missionaries wherever they go, do not tolerate other religions and try to wipe them out. Mizoram is not a land of Jesus but the land of India," he said.

"So, India's culture, tradition and values will prevail there."