Endorsement could be interpreted as a corrupt practice, deliberately done to influence voters, says lay leader 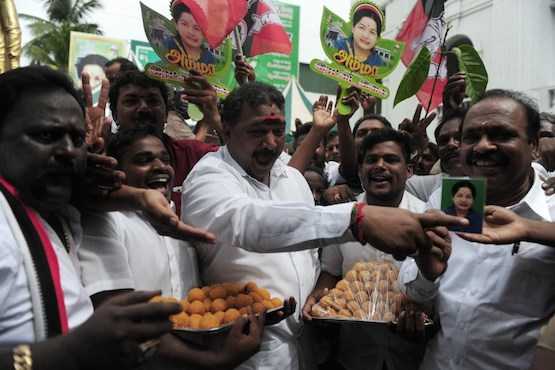 Members of the All India Anna Dravida Munnetra Kazhagam party distribute sweets in front of the party office in Chennai on May 19 after being voted in for a second consecutive term. (Photo by AFP)

Bishops in the southern India state of Tamil Nadu are being criticized for publicly supporting an opposition political party during elections for the local legislative elections.

In the run up to the recently concluded elections in Tamil Nadu, Archbishop Antony Pappusamy of Madurai, president of the Tamil Nadu Bishops' Council, issued a public statement endorsing the opposition Dravida Munnetra Kazhagam (DMK) party.

The state has a history of voting for the opposition, replacing the ruling government. However, during the Tamil Nadu election held May 16, the All India Anna Dravida Munnetra Kazhagam party was for the first time voted in for a second consecutive term.

"The endorsement was a very bad idea and they (the bishops) should not have supported the DMK so openly," said Bernard D'Sami, head of the history department at the Jesuit-run Loyola College, Chennai.

Christians constitute 6.5 percent of the 75 million people in the state and are decisive in certain pockets.

It is not the "responsibility of the bishops to tell people whom they should vote for. It should be left to the freedom of voters," D'Sami said.

However, Archbishop Pappusamy told ucanews.com that his "open support to DMK" was the stance the bishops' council decided to take after discussions with bishops and laity at various levels.

The laity have been looking for "clear directions" from the bishops in this election rather than "vague references to vote for secular parties and vote according to conscience."

Large sections of laypeople welcomed his public support of the opposition, he said. "Our support of the DMK was a decision to choose the lesser evil among the political parties," the archbishop said.

Auxilia Peter, a Christian lawyer, wondered how a bishop or a group of bishops could express the support of the entire Catholic community. "They should not have indicated their support to one particular political party," Peter told ucanews.com.

If they were concerned about guiding their people, they should have just highlighted the issues affecting the community and should have left the decision about voting to the people, Peter said.

Father Joe Anthony, editor of the Jesuit magazine Jivan said it is "always inadvisable and risky for any religious leader to name a particular political party for his followers to vote for, however desirable it may seem at the moment."

Devasahagayam, a former bureaucrat and a lay leader told ucanews.com that the archbishop could be prosecuted for violating the Representation of Peoples Act 1951. According to this law, the church leaders' endorsement could be interpreted as a corrupt practice, deliberately done to influence voters.

Some laypeople "misguided the archbishop" to make such an open statement endorsing the opposition, he said.