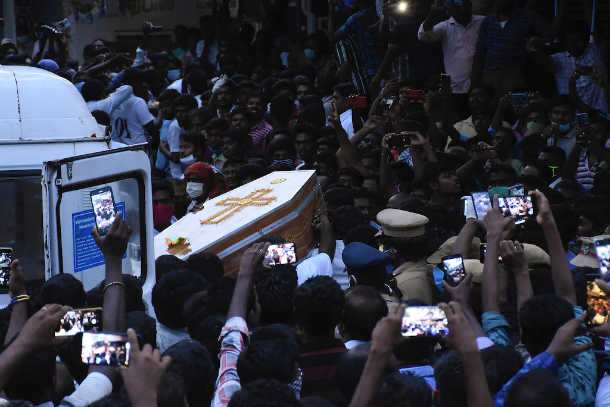 Residents gather on June 26 as they carry the coffin of P. Jayaraj, 58, and son Bennicks Immanuel, 31, allegedly tortured at the hands of police in Sathankulam of Thoothukudi district in Tamil Nadu. (Photo: AFP)

Catholic bishops have condemned the alleged police torture of two Christian men that resulted in their deaths in the southern Indian state of Tamil Nadu.

The state continues to witness massive protests after police announced the deaths of the father and son, days after they were arrested on June 19.

The deaths from alleged police torture have sparked outrage across India, with many drawing parallels with the killing of George Floyd in the United States.

The Catholic Bishops’ Conference of India “condemns the brutal assaults most strongly,” said Cardinal Oswald Gracias, the president of the CBCI, in a statement on June 28.

“Such brutality at the hands of a force that is called to protect our people is totally unacceptable. The police are expected to inspire confidence in the people.

“The law should take its course and deterrent punishment should follow. This is to inspire confidence in good, well-trained officers who truly bring repute to our police force,” the cardinal said, urging the government to act against the culprits and compensate the victims.

Father Sahaya Philomin Raj, a lawyer-priest who is closely following the case, told UCA News that police arrested Jayaraj on June 19 after he failed to close his son’s mobile phone shop in time following Covid-19 restrictions.

“The police officials brutally beat up both. They apparently put batons or some hard objects in their rectums, and they seemed to have died of excessive bleeding,” the priest said.

On June 22, the son died, and the following day his father also died. Immanuel was the only son of Jayaraj and only brother for three sisters. He was unmarried.

Father Raj said the case has also exposed the callous attitude of the government doctor, a magistrate and the jail authorities.

“It seems the magistrate did not bother to see the victims or ask about their condition but allowed them to be remanded in jail,” said the Jesuit priest.

“When a person is sent to jail, it is mandatory for the officials in the jail to get their medical examination done. It was not done properly, and they were kept inside the jail instead of sending them to hospital,” Father Raj said.

The Madurai bench of the state High Court on June 25 suo moto ordered a judicial probe into the incident and agreed to monitor the investigation.

However, public protests continue demanding justice for the victims as the government has not lodged any complaint against police officers accused of custodial torture. The officers were suspended.

The family of the deceased and rights groups want the government to register a murder case against police officers responsible for the death.

State Chief Minister Edappadi K. Palaniswami on June 28 agreed to hand over the probe to the Central Bureau of Investigation, the top federal investigation agency.