Besides promoting larger families among Catholics, the Church must inculcate the values of faith, hope and love 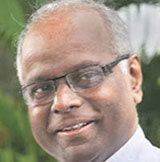 A crowded street in Chalai Market in the city of Trivandrum in India's Kerala's state, where Catholics are being urged to have bigger families. (Photo: AFP)

Pala Diocese in India's Kerala state was the first to announce 1,500-rupee (US$20) monthly assistance for couples married after the year 2000 who have four or more children. The Church also offered free education and medical care for siblings and parents, relying on its control of several educational institutions and hospitals in the southern state. The Malankara bishop of Pathananthitta Diocese followed suit with a bigger amount.

“Earlier in the 1950s, Christians formed 24.6 percent of Kerala’s population, but now they have declined to 17.2 percent. Christians have become the community with the lowest birth rate of 1.8 percent. It is in this situation that various dioceses have come forward with projects to support families with more children. It is not logical to consider population reduction as the only solution for social crises which arise due to improper development policies,” said Kerala Catholic Bishops’ Council.

The bishops justified the decision of Pala, Idukki and Thamarassery dioceses to reward families with four or more children. Pastoral letters were read in many churches in the state three weeks ago reminding believers of their “family duty and obligation.”

Catholic bishops seemed particularly vigilant of the falling number of their faithful. True, the birth rate among Catholics is falling. But is the reaction studied and taken from a Christian perspective? I am reminded of the vasectomy fair district administration held in Ernakulum town hall in 1970. I think 64,000 had undergone the operation. There was an incentive for it — a plastic bucket — which at that time was a rare enticing commodity.

Is the Church following the same type of incentives in reverse gear? The Mar Thoma Syrian Church has the lowest birth rate among Christians in Kerala, next is the Orthodox Church, then the Syro-Malabar Church.

Whence things have their coming into being, there they must also perish according to necessity

“Whence things have their coming into being, there they must also perish according to necessity; for they must pay a penalty and be judged for their injustice, according to the ordinance of time.” This is the translation of the Greek fragment of the Pre-Socratic thinker Anaximander of Miletus by Heidegger.

According to the text, which dates back over 2,600 years, things come to presence and linger before departing. The past, present and future of things are related by the link of 'give and take.' The past and future are ghosts haunting the present. Justice is at once a structure and a movement, being and becoming.

It speaks from the essential experience of injustice as the fundamental trait of things. To live more justly being aware of having received to give, human beings must respect this order: life is received as a gift — give life and depart. The inordinate appetite men have to cling to themselves monopolizes more time and space. In this way, they do more than just err. There is no higher affirmation than to say, “I love you, I want you to be.” The craze to possess, to rule is unjust. At the very heart of our capacity to act, therefore, is the unconditional affirmation of the given: I love — I want you to be. The gift of life gives the obligation to restitute life. We easily fall into the temptation of enjoying the gift of life without giving life. We live in suicidal oblivion of being. We are in an epoch that refuses to listen to the language of existence. Aren’t we straying as though through an infinite senselessness? God is dead has already cast its shadows over us.

Pope John Paul II condemned the growing and widespread "culture of death," which is a refusal to restitute life.

"Choices once unanimously considered criminal and rejected by the common moral sense are gradually becoming socially acceptable," the pope declared.

“A pregnant woman isn’t carrying a toothbrush in her stomach or a tumor. Science has taught us that from the moment of conception, the new being has its entire genetic code. It’s impressive. Therefore, it’s not a religious issue but rather a clear moral issue with a scientific basis because we are in the presence of a human being.”

The popes were not wailing over the declining number of Catholics. They were speaking for the human family. The Gospel is not only for Christians, it is a salvific message for humanity.

I consider morality as the right of the unborn over the born. The rich and the educated refuse to create a future

According to the Pew Research Centre, Muslims are projected to be the world’s fastest-growing major religious group in the decades ahead, and signs of this rapid growth are already visible. They have the highest fertility rate of any religious group — an average of 2.9 children per woman, well above replacement level (2.1), the minimum typically needed to maintain a stable population. Christians are second, at 2.6 children per woman. Hindu and Jewish fertility (2.3 each) are both just below the global average of 2.4 children per woman. All other groups have fertility levels too low to sustain their populations.

I consider morality as the right of the unborn over the born. The rich and the educated refuse to create a future. I believe in responsible parenthood, which is not breeding like animals, nor is it reducing sex to simple enjoyment without responsibility. The duty of religion is to impart values: values of faith, hope and love. Your divinity is your deepest value.

Instead of challenging the rich and powerful, the bishops are stooping to the market value of incentives, which have nothing to do with the value of life. The Church fails to inculcate the value and tries to influence like the man of the market; she also gives material incentives. The tragedy is that the Church belittles herself to an apparent preacher of communalism.

The Church should never appear to be building walls of separation in society. Any help to any human being must ensure the dignity and respect of the person. Christians have forgotten amid the propaganda market culture the Gospel principle “let your left hand know what your right hand is doing.”

Father Paul Thelakat is a Catholic priest of the Eastern-rite Syro-Malabar Church and former spokesman of its synod of bishops. He is editor of Light of Truth, a church-run biweekly from Kochi. The opinions expressed in this article are those of the author and do not necessarily reflect the official editorial position of UCA News.