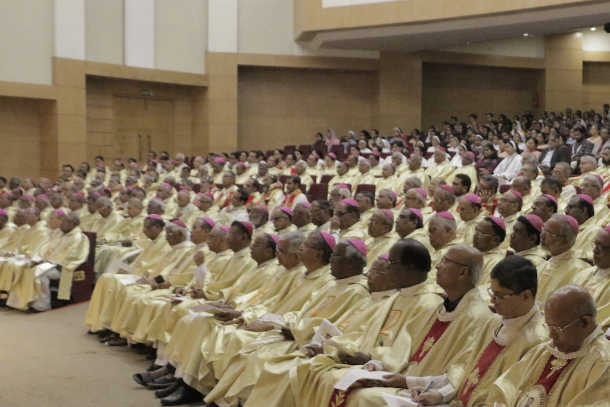 Catholic Bishops’ Conference of India members attend Mass during their Feb. 13-19 biennial gathering in Bengaluru. The bishops reiterated their 'zero tolerance' policy toward clerical sex violations in a statement after the meeting. (Photos supplied)

A group of Catholics and priests in an Indian diocese have appealed to the national bishops’ conference to implement the Church’s “zero tolerance” policy on a bishop facing allegations of moral turpitude.

Some 200 Catholics, backed by a section of priests, of Mysore Diocese in Karnataka state staged a public protest last week in Bengaluru when 192 Indian bishops were having their biennial meeting in the state's capital city.

They called on the bishops to take action against Bishop K.A. William of Mysore, who is accused of maintaining sexual relations with a woman and fathering her two children.

“We want Bishop William to be defrocked,” said Melvin Fernandes, secretary of the Association of Concerned Catholics, who revived their move against the bishop.

Bishop William dismissed the allegations as a retaliatory response from a group of priests who are opposed to his administrative reforms when they began to emerge last year.

The allegations resurfaced as the Catholic Bishops' Conference of India reiterated its “zero tolerance” policy toward clerical sex violations during their Feb. 13-19 gathering in Bangalore.

In a statement issued after the meeting, the bishops asserted there would be disciplinary action against offenders irrespective of their standing in the Church.

Fernandes told UCA News that bishops also issued a “zero tolerance” policy at least two years ago, but their call for action against the bishop was ignored.

“We wrote complaints to the Vatican, the nuncio and the president of the bishops’ conference, Cardinal Oswald Gracias, seeking action against Bishop William, but to no avail,” he told UCA News.At least 37 of some 100 priests in the diocese had also written a letter to the Vatican last November making the same charges and demanding the bishop's suspension. The letter was also leaked to the media.Bishop William, 54, addressed the media and denied the allegations against him, saying: “There is no truth in the allegations.” "A group [of priests] are behind it because of administrative reforms I introduced,” the bishop said during a press conference on Nov. 5. Fernandes said the charges against the bishop are serious and that his continuing as bishop without clearing his name through legally convincing ways will only damage the Church.“We want the bishop to undergo a DNA test to disprove the allegations that he fathered two children,” Fernandes told UCA News on Feb. 19. “If the bishop is sure that he is innocent, he should not be afraid of a DNA test.” A priest of Mysore, who sought anonymity, told UCA News that if the bishops’ conference “really mean what they said in their statement, they should ask Bishop William to undergo a DNA test.”

Fernandes threatened to widen the public campaign if the bishops and the Vatican fail to act against Bishop William.

“We have been pleading for justice, but they [church officials] are not serious. The Vatican did not even respond to our complaints,” he said.Bishop William could not be contacted but asserted his innocence in an earlier interview with UCA News.When asked about the demand for his DNA test, he said there was “no need for such a measure just because some disgruntled people make such demands.”