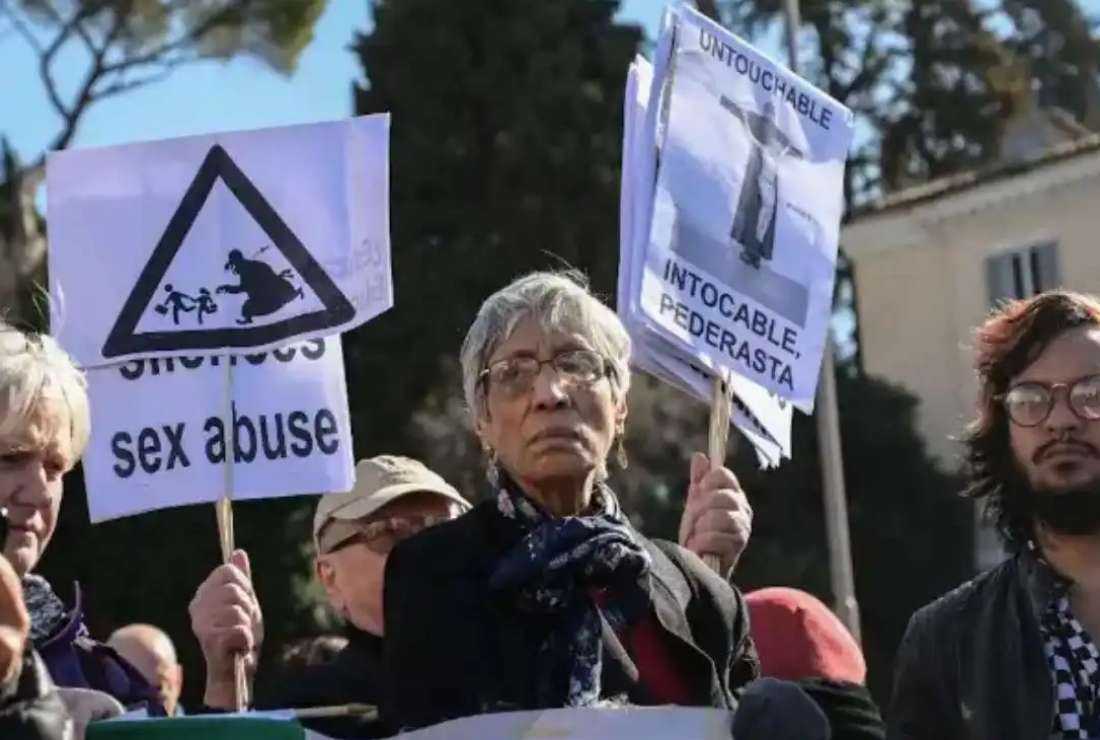 India's Virginia Saldanha (center) who serves as secretary of the Indian Women Theologians Forum and Ecclesia of Women in Asia, takes part in a protest by victims of clergy sexual abuse at the Piazza del Popolo in Rome on Feb. 23, 2019. (Photo: AFP/ UCA files)

An Indian court has granted anticipatory bail to Bishop Thomas Dabre of Pune, averting his likely arrest as a co-accused in a case of alleged clergy sexual abuse.

Bishop Dabre was named by Pune city police in the western Indian state of Maharashtra in a case under provisions of the Protection of Children from Sexual Offences Act. The case involves Father Vincent Pereira of Pune diocese, who was accused of abusing a 15-year-old schoolboy.

The case registered in September this year also named Cardinal Oswald Gracias, the archbishop of Bombay and former president of the Catholic Bishops Conference of India, along with Bishop Dabre, for allegedly shielding the alleged culprit priest despite complaints from the victim’s family.

Fearing arrest, Bishop Dabre had applied for anticipatory bail, a legal provision under which a court prevents the police from arresting a person by imposing certain conditions on the applicant.

"He had not initiated any action against the accused"

The Nov. 29 order by Additional Sessions Judge S P Ponkshe requires Bishop Dabre to present himself twice a week at the police station, where the case is registered, and cooperate during the investigations

He is also required to give an undertaking that he will not miss appearing in court when summoned and shall not tamper with prosecution evidence in any manner.

The court has ordered Bishop Dabre not to leave his home state of Maharashtra without the prior permission of the investigating police officer. Violation of any of the conditions imposed shall amount to the cancellation of bail forthwith, the court order stated.

The prelate’s bail application was opposed by the prosecution lawyer who pointed out how he had not initiated any action against the accused, Father Pereira, after the parents of the victim filed the abuse complaint on Dec. 12, 2021.

The court held that taking Bishop Dabre into custody was not necessary and in view of the prima facie material on record and allegations against him, pre-arrest bail could be granted by imposing conditions on him.

“The dubious record of Bishop Dabre is that he is the first Pune Bishop to be out on bail and involved in three POSCO cases with more to follow as the skeletons tumble out his closet,” Maruti Bapkar, the complainant and a human rights activist told UCA News.

Father Pereira was arrested on Nov. 25 for sexually assaulting the boy after meeting him at Pune railway station, while the boy and his parents were awaiting a train to their home state of Kerala.

The priest is also an accused in two other cases related to sex abuse of children.