Police outside a Missionaries of Charity home in Ranchi on July 6, 2018, after a nun and staff member was arrested on charges of selling a baby. A church official now demands a high-level probe into the role of a state agency in the allegations. (Photo: IANS)

Suspecting foul play in the increasing baby-selling charges against Missionaries of Charity nuns, a Catholic bishop in eastern India has demanded a high-level probe into the role of a government agency.

Auxiliary Bishop Theodore Mascarenhas of Ranchi made the demand on Nov. 20, days after state police raided a convent in his Jharkhand state in connection with three cases of baby selling registered against the nuns.

He wants India's top investigating agency, the Central Bureau of Investigation, to probe the role of the government's Child Welfare Committee (CWC) in the cases.

The Nov. 18 raid on a Missionaries of Charity convent in Dumka town was "the latest in a series of calculated attacks on the nuns," the bishop said.

The police, working under the state government of the pro-Hindu Bharatiya Janata Party (BJP), were "fabricating" the cases, he alleged.

The nuns have given the babies for adoption with the knowledge of the CWC in state capital Ranchi. The nuns have also complied with all laws and regulations on this, he said.

In all three cases, the nuns are accused of selling babies delivered in Nirmal Hriday (tender heart), a care home they run for unwed mothers in Ranchi.

Police registered the first case in July 2018. They also arrested and jailed Sister Concelia Baxla, who ran the home.

The 62-year-old nun was denied bail for more than a year and was released only on Sept. 27 this year. The second case of baby selling was filled in October, with a third one in November. 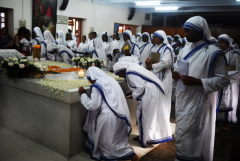 The nuns have all necessary documents to prove that children were given for adoption with the CWC's consent, Bishop Mascarenhas said.

In case of suspicion of violations or allegations in the process of adoption, the police should be probing the role of the CWC, he added. "But instead they are making motivated moves in targeting the nuns," he said.

He said the police raided the Dumka convent accusing the nuns of human trafficking.

The police were demanding certain documents of children, which should be with the CWC. They threatened to arrest the nuns if they failed to produce the documents before Nov. 22, the bishop said.

"In one case, a woman delivered [a baby] in a government hospital in Ranchi and the CWC gave the baby for adoption. But the nuns who cared for the unwed mother are now under the police scanner, not the CWC," Bishop Mascarenhas said.

In most cases, unwed women want an abortion, he said, but the nuns counsel them and offer support, care and confidentiality.

"But the impression now in Jharkhand is that helping the poor is a crime," said the bishop, former secretary-general of the Catholic Bishops' Conference of India.

Since 2014, the BJP has run the government in the state, where Christians have been complaining of facing violence and harassment at the hands of pro-Hindu groups who want to make India a Hindus-only nation.

Hindu groups also oppose missionaries and their social and educational services, projecting them as a façade for religious conversion.

Jharkhand has close to 1.5 million Christians, almost all tribal people, in a population of 32 million. Its 4.3 percent Christian population is nearly double that of the national figure.

Mother Teresa, who was canonized as St. Teresa of Calcutta in 2016, started the Missionaries of Charity congregation in 1950 to serve the "poorest of the poor."

Missionaries of Charity has 5,000 nuns in over 770 houses, 243 of them in India. They run homes for the destitute and dying besides shelter homes for unwed mothers and orphanages.