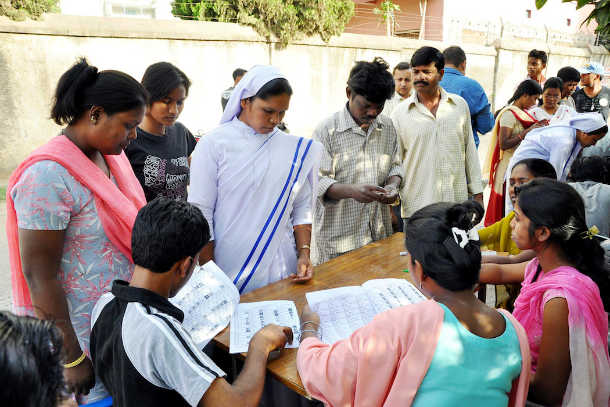 A file image of a Indian nun speaking with election officials as she searches for her name in the register of voters ahead of casting her vote at a polling station in Ranchi, Jharkhand on April 23, 2009. The pro-Hindu Bharatiya Janata Party (BJP) currently runs Jharkhand state where they have been accused of targeting and harassing Christians. (Photo by AFP)

The minister was briefed about difficulties being faced by the Christian minority.

Also present at the meeting was Conard K. Sangma, the Catholic chief minister of Meghalaya, a Christian majority state in north-eastern India.

Many Jharkhand Christians believe they are being unfairly targeted by a state government investigation of 88 Christian agencies over foreign donations.

The probes center on India's Foreign Contribution Regulation Act requiring that donations be received through a designated bank and spent only for specific social service undertakings.

In July, the state government run by the pro-Hindu Bharatiya Janata Party (BJP), that Singh is a federal member of, accused Catholic dioceses along with congregations such as Jesuits and Salesians, of using overseas donations to help obtain religious conversions.

Christian leaders maintain that "fabricated" cases have been used to keep a Jesuit priest as well as a Missionaries of Charity nun in jail for more than two months.

There has been a raft of cases where the impartiality of law enforcement agencies has been called into question.

Jesuit Father Alphonse Aind was taken into custody on June 22 accused of aiding and abetting the abduction and gang rape of five women social workers who had staged a play at his school.

Missionaries of Charity Sister Concilia, who ran a home for unmarried mothers in the state capital, Ranchi, was remanded in judicial custody July 5 on charges of child trafficking. A week later authorities suspended the bank account of the congregation.

Bishop Mascarenhas, who is also auxiliary bishop of Ranchi, said Singh had agreed that peace-loving Christians in Jharkhand should be allowed run their organizations without any unwarranted interference.

In Jharkhand, as well as alleged state government harassment, there have been attacks by some people angered by Christian conversions on worshippers at so-called house churches.

In some cases, the victims were arrested for allegedly violating the state's anti-conversion law.

A state law prohibits conversions without the permission of the government. It also criminalizes converting people using what is branded as force, fraud or allurement.

Missioners say their education and health services are misconstrued as violations of this law.

Christians say they have been subject to harassment and attacks since the pro-Hindu BJP in 2014 returned to power in Jharkhand.

In 2017, Indian Christians experienced 736 incidents of violence and harassment, and 22 such incidents were reported from Jharkhand, according to the watchdog Persecution Relief.