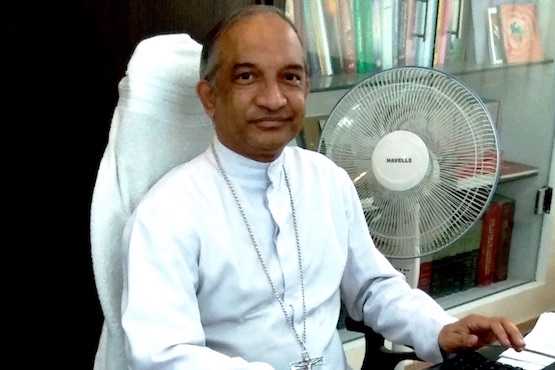 Bishop Ivan Pereira of Jammu–Srinagar in his office. The bishop says Jammu and Kashmir state should provide security to Rohingya refugees who face threats from Hindu right-wing groups. (Photo by Umar Manzoor Shah/ucanews.com)

Bishop Ivan Pereira of Jammu–Srinagar in northern India has asked the national government to ensure the safety of Muslim Rohingya refugees threatened by right-wing Hindu groups.

Death threats have caused more than 1,200 Rohingya to flee from the Jammu region where they have been sheltering since 2012 when ethnic violence flared in Buddhist-majority Myanmar.

Jammu and Kashmir, the only Muslim-majority state in India, has long endured a violent secessionist conflict involving local Muslims who want the region to become fully independent or join with Pakistan. Jammu–Srinagar Diocese covers the entire state of Jammu and Kashmir.

Some Hindu groups fear the presence of Rohingya could exacerbate the internal violence.

Bishop Pereira stressed that it was strife in Myanmar’s Rakhine State that forced them to leave their homes.

Since late August this year, hundreds of thousands more Rohingya have fled Myanmar, mainly to Bangladesh.

Bishop Pereira says members of the group that have come to India since 2012 are also victims of violence and uncertainty.

The state should meet their "immediate needs" and only then initiate a process of deportation if it considers them to be illegal migrants, the bishop said.

The Rohingya in India were already facing threats from Hindu groups such as Vishwa Hindu Parishad  (world Hindu council) who described their arrival as a conspiracy to change the demography of the Hindu-majority Jammu region in the state.

Rakesh Gupta, president of the Jammu Chamber of Commerce and Industry, in a statement last month described Rohingya as "criminals and drug traffickers" disowned by their own country.

He said if the government did not proceed with their deportation, his association would have no option but to launch an 'identify and kill' movement against them.

Among those fleeing the Jammu region is 43-year-old Rahim Sheikh.

He complained about having to run way from danger in Myanmar only to now again come under threat.

"Who wants to endanger the life of his family?" he said.

Showkat Ahmad, who heads the Sakhawat Centre, a Kashmir based volunteer group working among the refugees, told ucanews.com that Rohingya people settled in the Hindu-majority Jammu area to avoid the colder climate of the Muslim-majority Kashmir valley.

Government figures indicate that Jammu and Kashmir State houses 1,219 Rohingya families comprising 5,107 people and that only about 4,000 of them have United Nations High Commissioner for Refugees identity cards.

Unofficial figures put the number of Rohingya in the state at more than 10,000.

Rahim Sheikh, a father of two daughters, said it was not possible to live in the Jammu region under suspicion.

"The government and political parties were after us and we decided to leave the place forever," Sheikh said.

More than 250 families had already left.

"I have no idea where I will go with my family," Sheikh said.

"But one thing is certain, I will leave this place within a day or two."

Rohingya refugees in India have already been subjected to violence.

Three people were killed and six injured on Nov. 26 last year when an mob of Hindus set fire to 150 Rohingya shanties in Jammu.