A Catholic diocese in the western Indian state of Gujarat has appealed to priests and followers to cremate people who die from Covid-19.

Bishop Athanasius Rethna Swamy of Ahmedabad in a pastoral letter dated April 12 said that the “present situation poses a challenge to the Church in administering the last rites to the departed ones in a dignified manner. There are also issues of the dwindling space in our cemeteries.”

The Church teaches that departed Catholics can either be buried or cremated, the prelate said.

“In circumstances when cremation is chosen because of sanitary, economic or social considerations, this choice must never violate the explicitly stated or the reasonably inferable wishes of the deceased faithful,” Bishop Swamy’s letter said.

The Church raises no doctrinal objections to this practice because cremation of the deceased's body does not affect his or her soul, nor does it prevent God, in his omnipotence, from rising up the deceased body to new life, he added.

Cremation negates neither the Christian doctrine of the soul's immortality nor that of the resurrection of the body, he said.

It is a very sensitive and sacred ritual

Bishop Swamy said cremation has become a preferred option for Catholics who die of the coronavirus in terms of hygiene and scarcity of space in some cemeteries.

He told UCA News that a Jesuit brother who died of Covid-19 in Gujarat in January was cremated and his ashes were taken to Anand where he was based.

“It is a very sensitive and sacred ritual but since the circumstances and space crunch came up, we appealed to our people to go for cremation, but the faithful can still have regular burial rituals,” he said.

Father Jelastin, who is in charge of cemeteries in Sabarmati, told UCA News that people prefer burial as they are more comfortable with it and find it sacred and holy. 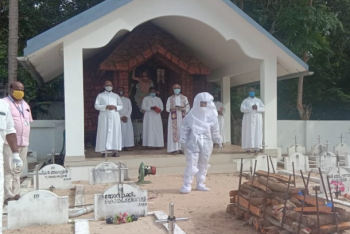 “We have a cemetery which accommodates people from all Christian denominations and places are almost 50 percent full, but we still can bury Covid-19 victims here. There is no problem as such, nor has anybody so far objected,” he said.

According to the World Health Organization, the burial of coronavirus victims poses the risk of a further outbreak via water sources. It says the high temperature of cremations kills the virus and there is no risk of it spreading.

Last year Cardinal Oswald Gracias of Bombay appealed to the faithful in his archdiocese to cremate people who died from Covid-19.

Similarly, in the southern state of Kerala, the Eastern-rite Syro-Malabar Church broke its centuries-old tradition by allowing cremation of Catholics who died of Covid-19 at any place of convenience, including private land.