A Catholic bishop in southern India is facing multiple court cases over an accusation that he misappropriated diocesan funds to support his "wife" and teenage son, but the bishop has denied the charges.

Bishop Prasad Gallela of Cuddapah (presently Kadapa) has been served notice to appear on Aug. 18 before Lok Adalat, a government-approved forum, to amicably settle cases pending in courts.

He is accused of misappropriating millions of rupees from diocesan social welfare funds to support his "wife" and 18-year-old son by cheating the church's administrative systems.

A court in Kadapa district of Andhra Pradesh state asked Bishop Gallela to appear before it on Aug. 2 but the bishop's lawyers pleaded for more time and the case was moved to the last week of August.

"We have solid documents accessed from the government to prove his married status," Kumar told ucanews.com.

The bishop is accused of money laundering, misappropriation of diocesan funds, corruption and cheating civil and religious authorities among other charges.

The bishop misled church authorities and Catholics because church laws clearly state that only a celibate male can be a priest and a bishop, Kumar said.

Documents filed in the court say the matter was communicated to the Vatican in November 2016 with details of the bishop's "immoral and corrupt" life and a demand for his removal, Kumar said, adding that church officials have not acted.

The petitioners and their supporters circulated copies of government-issued identity cards and land deeds where Prasad Gallela is presented as the husband of a woman called Gallela Sujatha. They also circulated a government identity card of 18-year-old Gallela Junior Prasad, the couple's son. Indian bishop tells of being kidnaped and assaulted 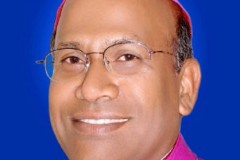 But some people doubt the authenticity of these documents. "There are so many documents to support all the allegations, but it all needs verification from competent authorities," said Jesuit Father A.X.J. Bosco, who works for the rights of socially poor Dalits in Andhra Pradesh.

He said the allegations are a few years old and connected with an ongoing caste fight within the church and society that led to the kidnapping of Bishop Gallela in April 2016. Two priests and 14 others were arrested on charges of attacking the bishop.

"It is all connected but unfortunately we have no proof to decide on anything. At the moment, all we have are allegations," Father Bosco said.

Bishop Gallela said the people who kidnapped him are making false accusations against him. "They are high-caste people and have the power, means and money. Everybody is afraid to talk against them. They are the Reddies, the socially, politically and economically dominating caste group here," he said.

He said the woman named as his wife is the second wife of his brother who died in 2001. His brother's son was hardly a year old when his father died and the entire family accepted the boy and his mother and took care of them.

"My family is more in touch with her," the bishop said, adding that presenting him as her husband is a "false interpretation" of his relationship with her.

Bishop Gallela said he will submit himself to the Vatican and Indian laws and welcomes any medical tests and investigation to prove his innocence.

Father Stephen Alathara, deputy secretary-general of India's Latin-rite bishops' conference, said it was aware of the case. "The hierarchy is doing what the laws of the church permit us to do," he said.

A senior church official said top leaders cannot make any public comment because "no one has enough information on a case that is under police investigation."

"If we deny it today and investigations establish it tomorrow, how do we wriggle out of that situation?" he asked, adding that church people are actively involved in finding out the truth.