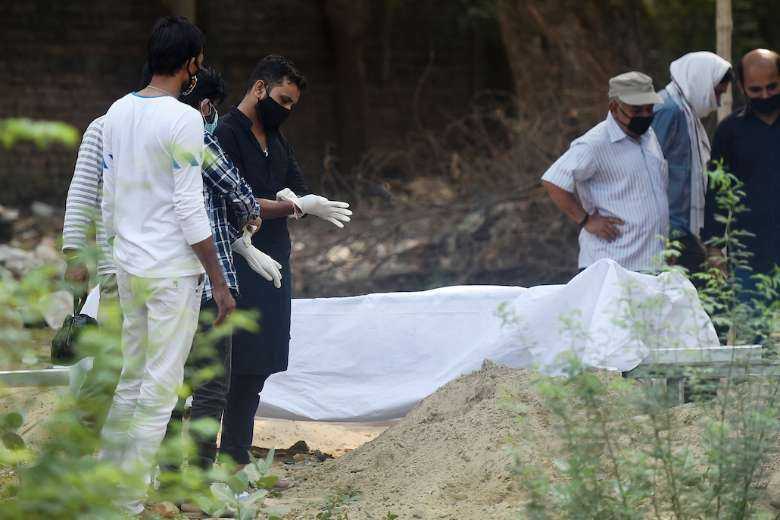 Relatives, friends and graveyard workers prepare to lower the body of a Covid-19 victim during a burial at a graveyard in Allahabad in the Indian state of Uttar Pradesh on May 2. (Photo: AFP)

India’s Supreme Court has warned the state and federal governments against clamping down on citizens for airing grievances about deficiencies in health care during the Covid-19 pandemic.

The apex court said on April 30 that it wanted to "make it very clear that if citizens communicate their grievances on social media, then it cannot be said it is wrong information."

"Let the message be clear to all states that we will consider it a contempt of this court if any citizen is harassed for making a plea on social media for oxygen or beds,” the court stated.

“It is very unfortunate that suffering people who are helpless can’t even express their feelings nor ask for help from fellow citizens for fear of arrest and persecution by the state machinery,” he told UCA News.

“The entire world knows the situation of our country in this world pandemic. The state and federal governments want to silence the people about their failure by taking action against them.

“The Indian constitution gives us freedom of expression and it is our right to ask our due. It is the duty of the government to take care of the welfare of the health of each and every citizen of this country.”

The court on April 22 took suo motu cognizance of the “alarming situation” including an oxygen shortage and asked the federal government for details of effective action it can take to handle the situation.

The second wave of Covid-19 in India has been devastating. With limited availability of hospital beds and medicine, it has forced people to use social media platforms to appeal for oxygen supplies and other medical assistance.

The Supreme Court suggested that a mechanism be put in place for real-time updates on oxygen supplies.

The hearing came after some states including the northern states of Uttar Pradesh and Haryana took action against Covid patients or their families over appeals for help on social media.

Uttar Pradesh’s government was charging people under the pretext of spreading misleading information online to tarnish the government's image.

If the government had been prepared well in advance after last year’s experiences, things would not have gone from bad to worse

In one video shared on social media, the daughter of a man who died from Covid in Lucknow, the capital of Uttar Pradesh, dared its chief minister to arrest her.

Mohammad Salim Engineer, secretary-general of Jamaat-e-Islami, told UCA News there was nothing wrong with families asking for help on social media if they failed to get any help from their respective governments.

“If the government had been prepared well in advance after last year’s experiences, things would not have gone from bad to worse where we are losing so many precious lives,” he said.