Supreme Court has ordered buffer zones to be maintained around protected forests, parks and wildlife sanctuaries 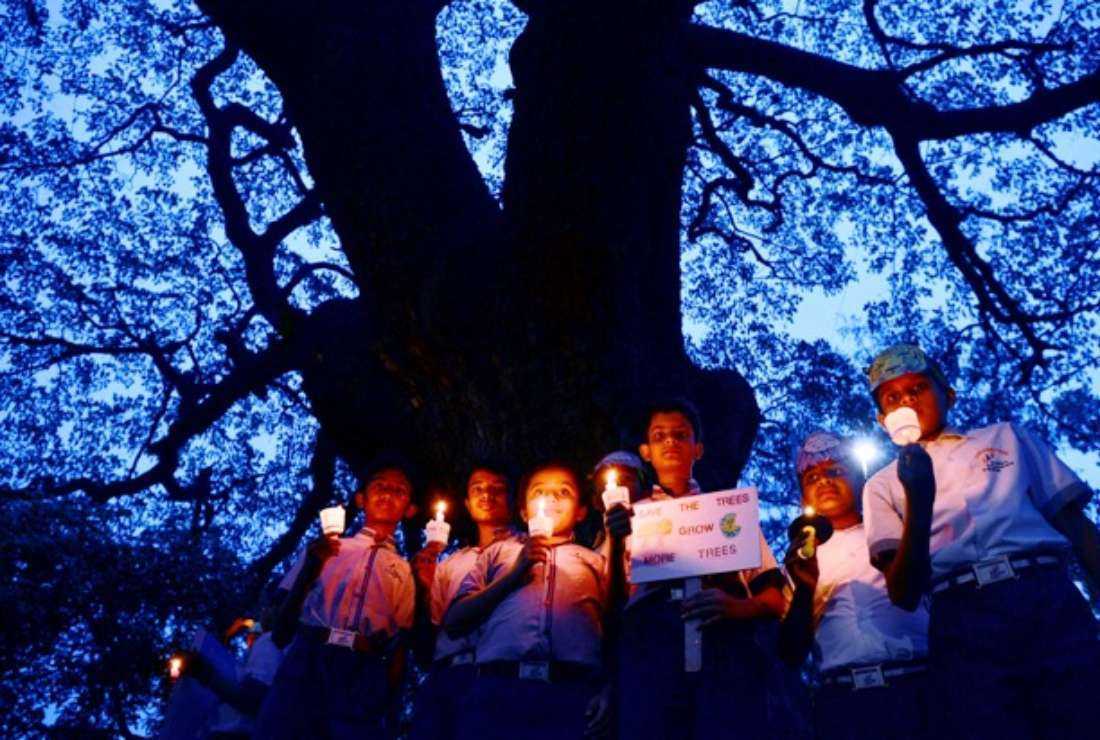 Indian children take part in a candlelit vigil held as part of a 'Save Trees' awareness rally in Bangalore on June 7, 2017. (Photo: AFP)

Farmers led by a Catholic archbishop in the southern Indian state of Kerala are opposing a Supreme Court order that imposes a ban on human activity in buffer zones extending one kilometer around protected forests.

They fear the June 3 judgment will lead to mass evictions from agricultural land located in the buffer zones.

“We will not let anyone take away our agriculture land,” warned Metropolitan Archbishop Joseph Pamplany of Tellicherry while addressing agitating farmers at Cherupuzha in Kannur district on June 21.

As a mark of solidarity with the farmers, the Syro-Malabar Church archbishop even sported a cap made of areca nut leaves traditionally used by farmers as protection from sunlight and rain while toiling in the fields.

“Today the irony is that snakes and wild boars have protection, but not human beings,” he said.

Speaking to UCA News on June 22, Archbishop Pamplany said the court order raises a serious question mark over the survival and future of close to two million farmers who may have to part with agricultural land that provides their only source of income.

India’s top court in its verdict directed that every protected forest, national park and wildlife sanctuary across the country should have a mandatory eco-sensitive zone (ESZ) of a minimum of one kilometer starting from their demarcated boundaries.

“No new permanent structure shall be permitted to come up for whatsoever purpose within the ESZ,” ordered the court after protracted inaction from the federal and state governments to present the factual position on the destruction of forests and the environment due to increased development and human activities.

Archbishop Pamplany has been addressing farmers’ protests in his archdiocese, urging them to join hands and protect their lands and livelihoods.

Some other parts of Kerala are witnessing similar protests to pursue the communist-led state government to seek a review of the order.

Father Joseph Ottaplackal, chairman of the Indian Farmers Movement (INFAM), a church-backed body based in Kerala, told UCA News that “it is a matter of great concern for the Church and we will back the farmers till they get justice.”

“We initially plan to hold protests and awareness programs at three places in Kerala and later expand the struggle to all parts of the state,” Father Ottaplackal said. “Our main demand is the state government fixes the ESZs within the boundaries of a protected forest rather than outside it.”

The aim is to ensure the protection of agricultural land without affecting the wildlife inside the forests, he said.

Earlier, Cardinal George Alencherry of the Eastern-rite Syro-Malabar Church had expressed his concern over the top court’s order while urging the federal and state governments to take immediate steps to avoid evicting farmers.