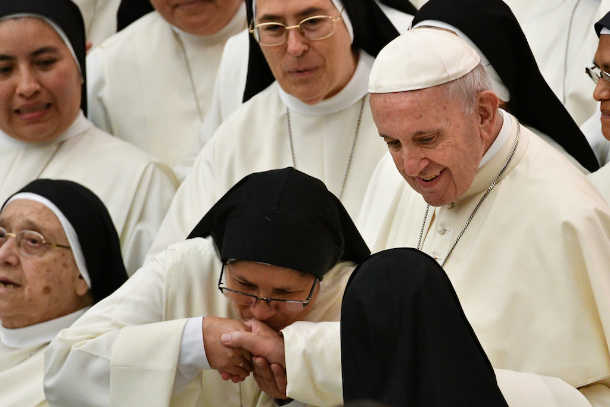 Pope Francis meets with nuns during his weekly general audience in Paul VI Hall at the Vatican on Aug. 22. His letter calling for fasting and prayer to atone for the sexual misdeeds of Catholic clergy has angered women in India. (Photo by Vincenzo Pinto/AFP)

Pope Francis' call for fasting and prayer to atone for the sexual misdeeds of clergy has evoked angry responses from leading Catholic women in India who are demanding action to stem such crimes.

The Aug. 20 papal letter asked for forgiveness for clerical abuse a week after a U.S. court investigation reported that over 300 "predator priests" in the state of Pennsylvania had abused more than 1,000 children over several decades.

Pope Francis stated that fasting could drive a desire for justice through a commitment to truth and charity.

"Making the laity fast and pray is not the solution," female theologian Kochurani Abraham told ucanews.com. "Clerical sexual infidelity should be punished and not hidden under the carpet."

She said the church needs to make a distinction between sin and crime. "Sin is something that you can repent and be absolved of," Abraham said. "But crime has to be punished." The sooner the church realized this, the better, she added.

Sister Nirmalini, provincial of the Sisters of the Apostolic Carmel, told ucanews.com that several allegations of sexual abuse by priests had emerged in India during recent months. However, church officials had been reticent to deal with such matters, one of which has attracted international attention.

"The silence of the church is deafening and the victim is made to feel guilty for raising her voice," Sister Nirmalini said. "Will the bishops stand up for justice for victims within the church?"

Police have been investigating Bishop Franco Mulakkal of Jalandhar after a Catholic nun, who is the former superior of a diocesan congregation under the bishop, accused him of raping her four years ago and then sexually abusing her 13 more times during the following two years.

A group of theologians and activists wrote to the Vatican and Indian church leaders asking that the bishop be required to step down while the probe is under way.

"But we saw no action," Abraham said. "The letter was not even acknowledged."

Astrid Lobo Gajiwala, an activist and a member of the Indian Bishops' Council for Women, expressed surprise that even two months after the police investigation of Bishop Mulakkal started, the church is still not acting.

"Isn't it time that the church started an investigation to find out whether he should continue as bishop?" she asked.

Several church officials maintain that church laws do not allow any bishops' body or any bishop to initiate such investigations.

"That is why we need changes in the system," Sister Nirmalini said. "The church has to be seen to be proactive on these crimes against women and children. Let a system be put in place at national level to deal with such cases."

She noted that sexual abuse crimes only came to light because of investigations by civil authorities rather than the actions of church officials.

Virginia Saldhana, a lay theologian, said the church globally wants concrete action from Pope Francis, such as adopting a system for reporting allegations of clerical sexual abuse, and not just "pious words".

"We live in a patriarchal society where men are in control and are considered superior to women," Gajiwala said. "Priests are a product of our society and carry their male power with them."

She said the fact that many Catholics treat priests "like God" made for very unequal power relationships and a culture of clericalism. "It brings untold privileges and breeds arrogance and authoritarian power in the clergy," she said.

There is a need to review canon law, which currently seems to tie the hands of local bishops to act without approval from Rome, as well as a revision of seminary formation and a framework to report clerical abuses to civil authorities, she said.

Gajiwala also wants church affairs to be conducted in a less hierarchical fashion.

"We are the church, not just the clergy and bishops, and the church is the concern of all, not just of the ordained," she said. "We all have a stake in its effective functioning, so why are we not there in the leadership?"