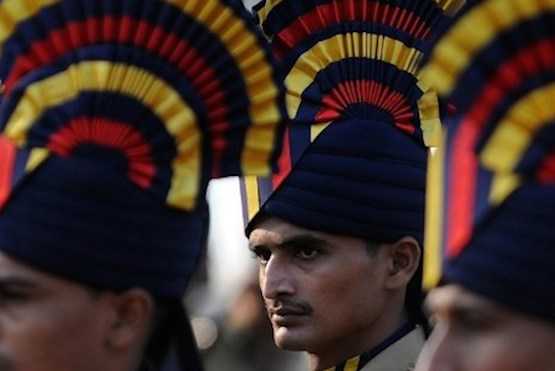 An Indian policeman looks on during a guard of honor at a memorial for police and uniformed personnel who lost their lives in the 2008 terror attacks in Mumbai in this Nov 2012 file photo. India's Maharashtra state, of which Mumbai is the capital, plans to introduce its own security law to check terrorism. (Photo by AFP)

India's Maharashtra state plans to introduce its own security law to check terrorism, insurgency, caste-related violence and sectarianism in an area that includes Mumbai, the nation’s commercial hub, but many rights activists question the move.

The state government — run by a coalition of Hindu nationalist parties — made public last week the draft of its Maharashtra Protection of Internal Security Act, seeking public opinion before it is presented to the legislature.

The law proposes to set up special security zones to check the movement of arms, explosives and the flow of unaccounted funds. State capital, Mumbai has witnessed several terror attacks in the past decade and also sectarian riots between Hindus and Muslims who live in different areas of the economic hub.

The special security zones will have separate operating procedures within the existing police infrastructure. The bill also plans to protect critical installations such as nuclear reactors, dams, major projects and coastal areas; if passed it will become the first law of its kind in the country.

Rights groups such as Commonwealth Human Rights Initiative (CHRI) and Police Reforms Watch (PRW) said the law would give excessive power to the police. They also questioned its necessity when there already is nationwide legislation regarding national security.

"If this bill is passed anyone can be booked," said Dolphy D'Souza from PRW. "The fear is that religious minorities are going to be hit worse than others."

The bill groups together "terrorism, insurgency, sectarianism and caste violence" without differentiating the nature of the threats from each one, according to D'Souza and his colleagues.

"In order to bring every threat under one law, the bill relies on dangerously vague catch-all definitions," he said.

India already has enough laws to deal with the issues mentioned in the draft, D’Souza said. "So why does the state require more laws?"

The activist was concerned that the government was aiming to curtail citizens’ freedom of action and movement.

"It is equally alarming that the bill gives the state government and police sweeping discretionary powers in the absence of sufficient checks or accountability," he added.

According to Maja Daruwala, director of CHRI, the bill "is ill-considered both in its intent and content. Every citizen should be alarmed at sweeping laws like this which are designed for abuse.”

She said the greatest security the state can provide "is to make sure we have an honest efficient and lawful police and a court system geared to give speedy and fair justice. Certainly more and more laws can only muddy the waters and reduce people’s power to face oppression."