A nun walks past a leprosy patient in this 2014 photo from Kolkata, India. (Photo by Dibyangshu Sarkar/AFP)

An Italian nun who has helped people with leprosy for over four decades in India has been denied a visa and must leave the country.

Sister Bertilla Capra's visa expired in November and she has since been denied a renewal.

Officials told Sister Capra, who belongs to the Missionaries of the Immaculate Congregation, that the visa application format has changed and she will need to apply using the new format.

Since first arriving in India in 1970, Sister Capra had to only apply for a visa renewal every five years up until 2010. After that, rule changes meant she needed to renew her visa annually.

Sister Capra said she got the message to leave the country twice: once in November, then again in December.

Sister Capra is the director of the Vimala Dermatological Center, which is involved in the rehabilitation of leprosy patients in Mumbai, and she has never had visa problems before.

"If I do not get the visa, I will have no choice but to leave," she told ucanews.com.

"I am so attached to the place and people here. Also, I do not have the chance to go to any other country and join some other mission. It is not easy for me to move," she said.

Bombay Archdiocese spokesman, Father Nigel Barret, told ucanews.com that Sister Capra is complying with the instructions given to her by the authorities but she does not have enough time to file all the papers.

"This is not a direct deportation but it is being done very indirectly," he said. 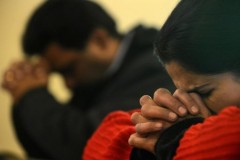 Christians spurn Hindu attempt to 'reach out' to them

Sister Capra added that nuns from her congregation in New Delhi are trying to meet with officials to try and resolve the issue.

Sources in the Foreign Ministry told ucanews.com that visa rules change from time to time depending on security and other related issues. There is no particular reason to deny visas to genuine applicants, the sources said.

"In this case enough time is being given to apply fresh papers according to the new norms," a source said.

The visa denial comes amid accusations that the ruling partners in Maharashtra state the pro-Hindu Bharatiya Janata Party and Shiv Sena are stoking a climate of intolerance against minority religions in India.

Aamir Khan, a popular Muslim actor was recently removed as head of the Indian campaign to market the country to tourists abroad because he reportedly criticized the country for being intolerant toward Christians and Muslims.

Maharashtra state has also banned the slaughter of cows and the sale and consumption of beef. Cows are revered by most Hindus who make up about 80 percent of India's 1.2 billion people.