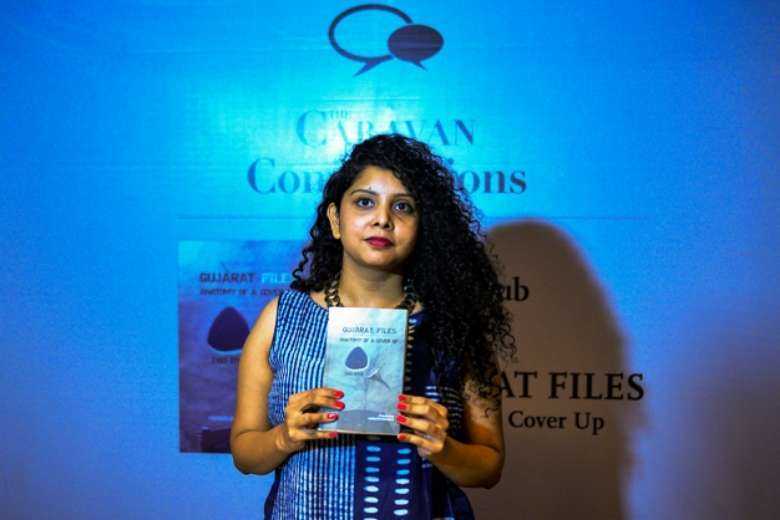 Indian journalist Rana Ayyub poses with her self-published book 'Gujarat Files' during a launch event in New Delhi on May 27, 2016. (Photo: AFP)

India has taken exception to United Nations rights advocates "advancing a misleading narrative" in an ongoing probe it has ordered against journalist Rana Ayyub for suspected money laundering.

Ayyub is a female Muslim writer known for her sharp criticism of Prime Minister Narendra Modi and his pro-Hindu regime.

The Modi government has ordered a probe by the Enforcement Directorate (ED), a specialized financial investigation agency, into funds worth 177,000 rupees (US$2,365) generated by Ayyub from an online crowdfunding platform during the coronavirus pandemic, accusing her of using them for her personal use.

In a statement issued in Geneva, Irene Khan, special rapporteur on the right to freedom of opinion and expression, and Mary Lawlor, special rapporteur on the situation of human rights defenders, had said that the “relentless misogynistic and sectarian attacks online” against Ayyub must be investigated and the “judicial harassment against her brought to an end at once.”

“Allegations of so-called judicial harassment are baseless and unwarranted. India upholds the rule of law … no one is above the law,” said India’s permanent mission to the UN in Geneva in a tweet.

“We expect the SRs [special rapporteurs] to be objective and accurately informed. Advancing a misleading narrative only tarnishes the UN’s reputation,” it added.

The matter was further followed up with a note verbale — a diplomatic correspondence — from the Indian permanent mission besides being taken up by the Indian side with the UN office in Geneva.

The probe against Ayyub was launched in September 2021 based on a first information report registered by Ghaziabad police in Uttar Pradesh state, based on an individual accusing her of illegally acquiring public money.

On Feb. 10, the ED attached the funds from the journalist’s bank accounts, alleging that donations raised by her for Covid-19 relief work were spent for personal expenses. An allegation of suspected money laundering too was being probed.

In a statement issued on Feb. 11, Ayyub refuted all allegations made by Indian authorities against her.

The journalist, it was alleged, had associated with a leading Western publication and knowingly indulged in “proceeds of crime including its acquisition and possession"

“Rana Ayyub has cheated the general public donors in a pre-planned manner and with the intention to cheat,” the authorities alleged.

The ED said that Ayyub’s scam started right from the time she collected the money and started withdrawing it from her and her family members’ savings bank accounts.

The ED further alleged that a fixed-term deposit earning a higher interest rate was booked from her savings bank account through internet banking while a separate current bank account was opened subsequently.

The funds were transferred from her savings bank account as well as those in the name of her sister and father and were not used for the purpose for which they were raised in the first place, the ED added.

Interestingly, Ayyub donated a part of the collected money to the prime minister’s PM CARES fund besides a chief minister or provincial head’s relief fund days after the probe against her began, the ED said.