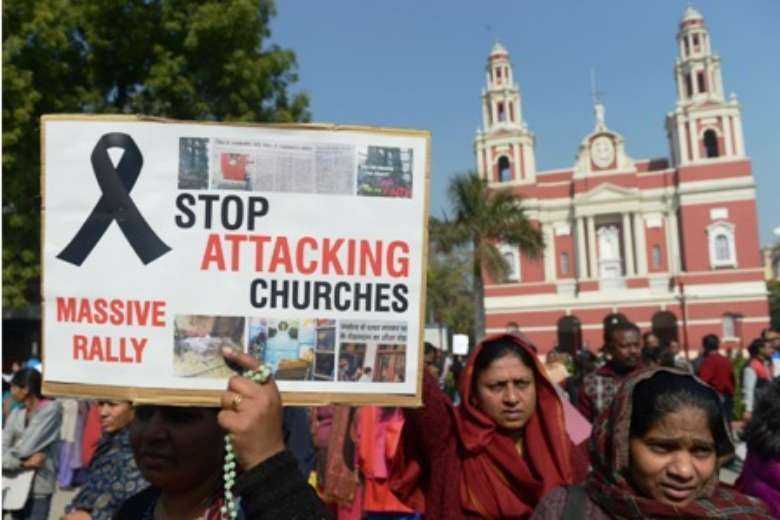 Indian Christians demonstrate outside the Sacred Heart Cathedral in New Delhi following attacks on churches in the national capital on Feb. 5, 2015. (Photo: AFP)

India witnessed a record 486 incidents of violence against Christians during 2021, which ended on a violent note for the community that makes up only 2.3 percent of the country’s over 1.3 billion population.

Data collected by the United Christian Forum (UCF) showed an upward trend in such violent incidents over the last few years but 2021 was termed as the “most violent year” in the country’s history. The past two months witnessed over 100 incidents as if to warn the community during Christmas, it said.

The 486 incidents top the previous record of 328 incidents in 2019. They were also far more widespread than previously recorded with incidents reported in 20 states and two union territories.

“In almost all incidents reported across India, vigilante mobs composed of religious extremists have been seen to either barge into a prayer gathering or round up individuals that they believe are involved in forcible religious conversions,” says the UCF’s latest report

The UCF attributed the high incidence of violence to “impunity.”  Police recorded formal complaints in only 34 of the 486 cases due to which “such mobs criminally threaten, physically assault people in prayer, before handing them over to the police on allegations of forcible conversions.”

The UCF is an inter-denominational Christian organization that fights for the rights of members of India's Christian minority. Its Convener A C Michael said the steady year-on-year increase in violence against a peace-loving community had escalated in the last quarter to alarming numbers.

“The last two months of 2021 witnessed over one hundred incidents as if to warn Christians against celebrating the birthday of Lord Jesus Christ,” he said referring to the complaints received from community members on the UCF’s toll-free helpline number 1800-208-4545.

“The national slogan coined by Prime Minister Narendra Modi promising “Sab Ka Saath, Sab Ka Vikas, Sab Ka Vishwas” [Together, for everyone’s growth, with everyone’s trust] has proved to be a hollow, rhetorical bell for the Christian minority,” he added.

Michael, a former member of the Delhi Minorities Commission, said the atmosphere of hatred caused by false propaganda on religious conversions had led many provincial governments to pass laws to prevent them. All this had emboldened some religious fanatics to attack Christians.

“It will not be exaggerating if it is said that these incidents are well-orchestrated and pre-planned acts by certain vested groups to divide the country on the basis of religion,” Michael said.

The UCF press release further pointed out that four states reported very high incidents — 102 in Uttar Pradesh, 90 in Chhattisgarh, 44 in Jharkhand and 38 in Madhya Pradesh, all of them located in the northern and central parts of the country — indicating that practicing Christianity in these states had become dangerous. The state authorities had failed to safeguard its citizens’ right to worship, it said.

Among other states, Karnataka in the south topped the list with 59 incidents.

Just days before Christmas, Karnataka became the 10th state in India to pass an anti-conversion law, which presumes that Christians force or lure Hindus to convert them to their faith.

Most of these states with laws against conversion are ruled by the pro-Hindu Bharatiya Janata Party or its allies who are partners in governing the country.

The UCF claimed to have intervened to obtain the release of 210 persons from detention. Also, it had helped 46 places of worship that were targeted to reopen and continue prayer services.

India has been witnessing increased religious polarization since Modi came to power in 2014, bolstering radical Hindu groups to accelerate their actions aimed at making India into a Hindu-only nation.

Hindus comprise about 80 percent of the country’s population but Hindu nationalists fear they will be outnumbered by minority Muslims and Christians in the future.