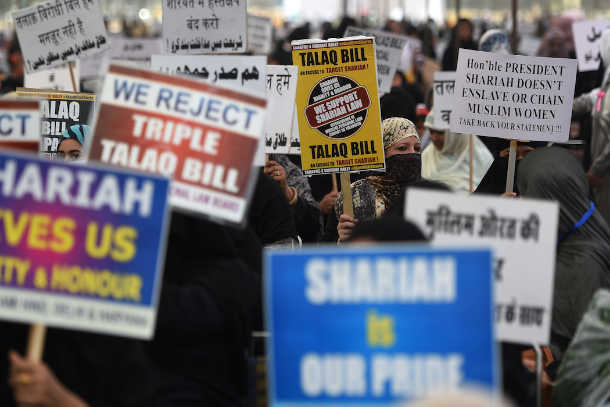 Indian Muslim women take part in a protest against the so-called 'triple talaq' bill, to criminalize instant divorce, in New Delhi in April 2018. The controversial bill is back before the parliament. (Photo by Money Sharma/AFP).

Many Muslim leaders perceive an anti-Muslim bias in a bill before parliament to criminalize the Islamic practice of verbal divorce.

The measure has been backed by Prime Minister Narendra Modi and his pro-Hindu Bharatiya Janata Party (BJP).

Modi, in an address to parliament June 26, said the bill aims to stop victimization of women and ensure they have equal rights to men.

Further, he said the bill is to safeguard the "dignity" of women.

The Muslim Women (Protection of Rights on Marriage) Bill 2019 was the first bill to be tabled after parliament began a new session on June 19, early in the second five-year term of the Modi government.

The bill stipulates a three-year jail term for anyone engaging in so-called 'triple talaq', the practice of verbal divorce by which a Muslim husband can divorce his wife just by saying talaq (divorce) three times in a row.

Rajath Kumar, an Indian civil society activist, commented: "One wonders whether instant divorce is the only issue confronting the country now. The government ignores burning issues such as unemployment and prices rise to rake up insignificant issues such as this."

He said criminalizing verbal divorce would further alienate the Muslim community from the government.

The BJP and its allies, which won a majority in the parliament in April-May general elections, already faces criticism for its alleged sympathetic attitude towards hard-line Hindu nationalists.

Kumar noted that the BJP government pushed its legislative agenda on instant divorce during its last term in office, but could not secure enough support in the upper house of parliament.

However, in the new upper house, known as the Rajya Sabha, it now expects to have the backing to pass the instant divorce bill into law despite objections from many Muslims and the opposition Congress Party.

A number of Muslim leaders as well as Member of Parliament Asaduddin Owaisi called the bill unconstitutional as it aimed to restrict freedom to practice a faith. Moreover, Owaisi said the country has criminal laws and a law — the Muslim Women Marriage Act — that can already protect the rights of Muslim women.

Some Muslim women have been publicly supportive of ending triple talaq.

But Owaisi claimed the bill, if passed, would constitute an injustice for women.

He maintains that, according to the wording of the bill, if a Muslim man commits this crime, the marriage would remain intact, but the perpetrator could be be jailed for up to three years.

"He'll be jailed for three years but the marriage will be intact — what law is Mr Modi forming?" he asked.

Molvi Javaid Ahmad, a religious scholar in India's northern state of Jammu and Kashmir, echoed similar sentiments, noting that the practice is already discouraged by a majority of Muslim countries, including Pakistan.

He said the proposed new law could fill Indian jails with Muslim men and that many women and their families would lose financial support.

He said the BJP and its affiliated Hindu organizations, already known for their anti-Muslim approach, had "invented a new way to hound Muslims and send them to jail."

However, federal Law Minister Ravi Shankar Prasad, who presented the bill in parliament, said the issue was not a question of religion but about "justice" for women.

Opposition Congress member Shashi Tharoor said he and his party was opposed to verbal divorce, but was also against the bill as it conflates civil and criminal laws.

He called the bill is "a textbook example of class legislation" as it was aimed at Muslims, although the abandonment of wives is not unique to that religious community in India.

He wanted a law that was universally applicable to any and all cases where wives were abandoned, regardless of religious affiliation.

Ankita Sharma, a women rights activist based in New Delhi, said the bill has several flaws and that the government was intentionally seeking to prosecute Muslims.

"Marriage is a civil contract and there is no need to bring the criminal penal code into it," Sharma told ucanews.com.

"The government can simply declare the practice null and void. Why is it adamant on jailing violators? This bill is nothing but an attempt to make the community suffer more," she said.

The majority of Indian Muslims, who comprise of 14.26 percent of the nation's population, follow a specific Islamic school of law called Hannifin Islam, which allows triple talaq.