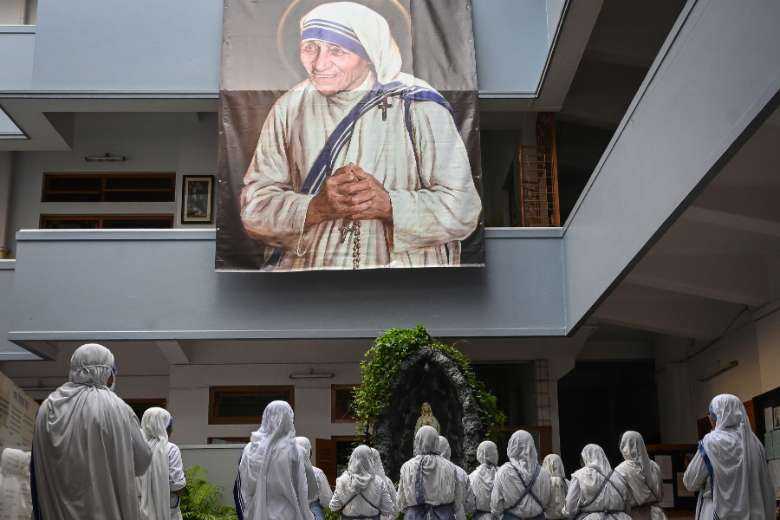 Nuns from the Missionaries of Charity attend a special prayer to mark the 111th birth anniversary of Saint Mother Teresa near a banner with her picture at the Mother House in Kolkata, India, on Aug. 26. (Photo: AFP)

By AFP and UCA News reporter

India has moved to cut off foreign funding to a charity founded by Saint Mother Teresa, a decision critics described as further evidence of harassment of Christians under the Hindu nationalist government.

The Missionaries of Charity(MC)was founded in 1950 by the late Mother Teresa, a Catholic nun who devoted most of her life to helping the poor in the eastern city of Kolkata. She won the Nobel Peace Prize and was later declared a saint.

“We have been informed that our FCRA (Foreign Contribution Regulation Act) renewal application has not been approved. Therefore, as a measure to ensure there is no lapse we have asked our centers not to operate any of the FC accounts until the matter is resolved,” said the congregation’s superior general Sister Prema in a statement on Dec. 27.

The organization runs shelter homes across India. According to the Hindu daily, it received around $750 million from abroad in the 2020-21 financial year.

The MC’s clarification came after Indian media reported that the federal government had frozen the foreign fund accounts of the congregation and sought help for maintaining thousands of inmates living in its different orphanages and care homes across India.

The Indian Home Ministry said that on Dec. 25 -- Christmas Day -- the renewal of the charity's license to receive funding from abroad had been "refused."

The statement issued on Dec. 27 said the reason was "not meeting the eligibility conditions" under the FCRA after "adverse inputs were noticed," without giving further details.

“The MC nuns care for thousands of the rejected of India without counting the cost. Stopping the flow of funds to them, in simple terms, means depriving the poorest of the poor in India- humans whom no one cares for,” said a Jesuit right activist Father Cedric Prakash.

The government move denies the destitute people “the basic human need of shelter and food- not to mention the acceptance, warmth and love which they desperately need and which the Sisters and Brothers give them so ungrudgingly,” Father Prakash said.

He wanted the government to “reconsider this terrible  decision and restore the good name and work of the MC nuns.”

“If there are any laxities or shortcomings the MC nuns must be helped to address them;  and above all, to ensure that those who are cared for in the MC institutions are not deprived of this basic humanitarian assistance,” he added.

Dominic Gomes, vicar general of the Archdiocese of Calcutta, said the announcement was "a cruel Christmas gift to the poorest of the poor."

“Besides over 22,000 direct dependants and beneficiaries at their centers across the country, MC Sisters and Brothers reach out to uplift thousands and are often the only friends of the lepers and social outcast no one will even venture near," Father Gomes said.

In 2020, the US Commission on International Religious Freedom listed India as a "country of particular concern" for the first time since 2004.

Modi's government rejects having a radical "Hindutva" (Hindu hegemony) agenda and insists people of all religions have equal rights.

The Missionaries of Charity said in a statement that it had instructed its centers not to use any foreign currency account "until the matter is resolved."

The organization, however, rejected reports that its bank accounts had been frozen.

RATHIRAJ
Excellent job done. Foreign funds for altering the culture and society, isn't less than actual armed attack. The crackdown is based on long observations and investigations by the government agencies. Well, blame it on BJP, but they are doing well to protect the Hindus and the secular nature of India.
Reply

S K PANDA
Miasionary goals are to dropped as changing religion, either by inducing or by force, is the worst thing and considered bad in India
Reply