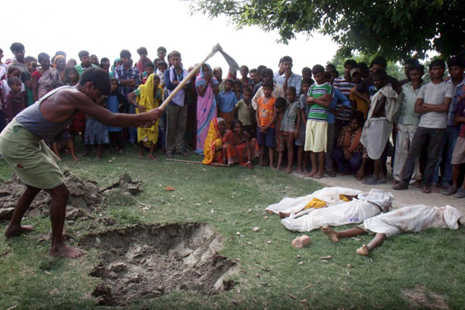 The federal government in the eastern Indian state of Bihar will set up a committee to review the implementation of its flagship midday meal scheme, following the deaths of 23 school children this week from contaminated food.

A 20-strong panel of government officials and civil society members will scrutinize the initiative, which feeds some 120 million of India’s poorest children. Until the mass poisoning on Tuesday it had been widely lauded.

The tragedy has sparked widespread anger across the state. A car carrying Bihar’s social welfare minister, Parween Amanullah, was yesterday attacked and held up by a mob in the Vaishali district, apparently in response to the incident.

The opposition Bharatiya Janata Party (BJP) has demanded the scrapping of the scheme, which has been running since the 1920s.

“Survey after survey has shown that midday meals are … prepared in very pitiable conditions and stored in equally bad conditions. There have been adverse reports from other parts of India also, It needs to be scrapped."

Fearful of further poisoning, thousands of children in Bihar are reportedly refusing to take free midday meals in schools.

“Reports from Bihar reaching the national capital said the children in several districts, such as Patna, Muzaffarpur, and Bhagalpur dumped the food served to them during lunch time by the school authorities,” said an official in the human and resource development ministry.

Around 100 children were yesterday taken ill after eating the free meal at a government-aided girls’ secondary school at Neyveli in Tamil Nadu, southern India. A similar incident occurred on July 3 when 110 children at a school in East Midnapore, West Bengal, fell ill after the midday meal.