The federal government fears that the move may encourage religious conversions 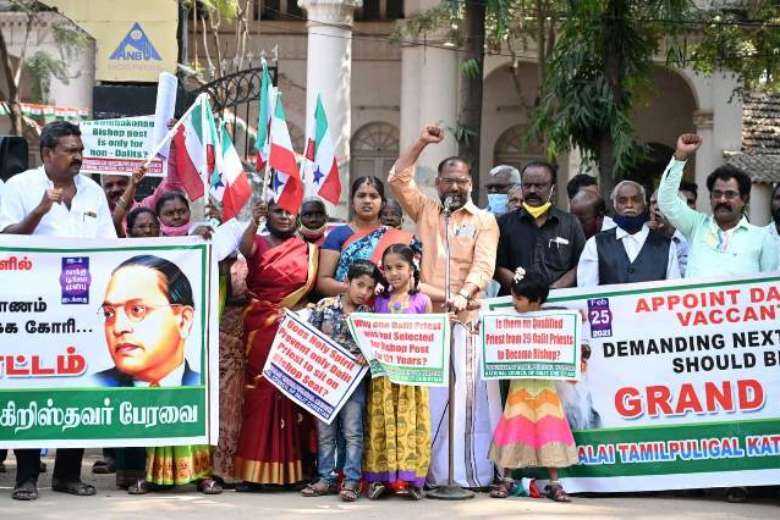 Dalit Christians protest against the discrimination they face in Kumbakonam Diocese in southern India in February 2021. (Photo supplied)

India’s government is considering setting up a fresh national panel to explore the possibilities of giving scheduled caste (SC) status to Dalit converts to Christianity and Islam.

However, Dalit Christians remain skeptical about their long-pending demand for SC status, which would likely ensure education and job quotas for them

Franklin Caesar Thomas, coordinator of the National Council of Dalit Christians (NCDC), told UCA News that there was already an official committee looking into their demand for reservations or affirmative action.

“There were recommendations from the Ranganath Misra Commission and the Sachar Committee for reservations for Dalits among Christian and Muslim minority communities. The case has been pending in the Supreme Court for years,” Thomas said.

In fact, the federal government had told the Supreme Court that it was “not agreeable to” granting the minorities such rights, claiming that education and job quotas would encourage religious conversions.

The newly proposed National Commission on Scheduled Caste Converts to Other Religions will examine a number of issues, especially finding out the discrimination SC community members face after undergoing conversion to other religions in social, economic and other aspects.

Is the government serious or it is just another promise with an eye on the state polls later in the year?

The panel comprising a federal minister, a member from the judiciary and a retired bureaucrat will also examine the possible implications of SC status if accorded to minority community members, said officials aware of the development.

Thomas felt the panel may remain just on a paper. “Is the government serious or it is just another promise with an eye on the state polls later in the year?” he asked.

In January 2020, the NCDC filed a petition in the Supreme Court to make SC status "religion-neutral." At present SC reservations are extended to Hindus, Sikhs and Buddhists.

Mukti Prakash Tirkey, editor of a weekly newspaper in New Delhi, said India’s apex court had agreed to examine the plea and would hopefully do justice to Dalit Christians and Muslims who have been suffering discrimination for more than five decades.

The National Commission for Religious and Linguistic Minorities, also known as the Justice Ranganath Misra Commission, in its 2007 report had recommended that Christians and Muslims should be extended reservations in education and jobs.

Dalits, who are former untouchables within the centuries-old Hindu caste hierarchy, have converted to Christianity and Islam over the decades, though in reality the religions offer limited protection from age-old societal prejudice.