Every country in this world has a child labor history.

Some 150 years ago child labor was prevalent in Sweden. Read Charles Dickens and we know how exploitative and depraved Britain was in treating its children. But every country that progressed in this world, be it South Korea or Malaysia 50 years ago, took a decision to send their children to school and adults to work.

India has been stubbornly refusing to make that decision for the last 68 years, ever since it became an independent nation. The current government lead by Narendra Modi is no exception. This is a clear waste of the electoral mandate for social change that he received.

Last Wednesday Modi’s government agreed to table an amendment to a 1986 law that banned employing children below 14 years of age in hazardous industries.

The amendment proposes to ban child labor in all kinds of industries, and that would seem a progressive step. The amendment also looks corollary to a 2009 law that made education a fundamental right for all children aged 6-14. 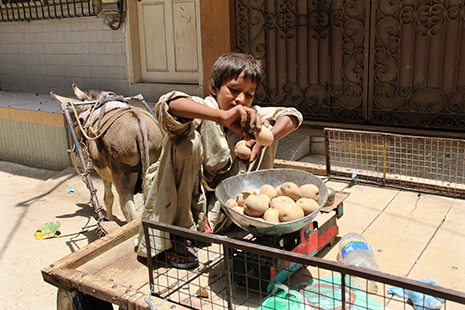 But the amendment in effect works against children as it allows children below 14 years to work in non-hazardous family enterprises because of the “social fabric” of India.

The social fabric may be explained in the context of a caste based and poverty-stricken social system, where millions of children help poor families in the fields and at home.

The amendment in fact will open the floodgates for hundreds of thousands of children joining “family enterprises” created for exploitative employers. This will push an equal number of adults out from the labor market, affecting the nation's economy.

It is not poverty that causes child labor. It is the other way round. It is child labor that perpetuates poverty. When children work they are actually doing what able-bodied adults should be doing.

Children replace adults in the work force earning no wages or low wages. This keeps general wages and the purchasing power of the people low. Poor purchasing power ensures that the national economy remains poor.

This economically disastrous and ethically regressive draft amendment of the Child Labour Prohibition and Regulation Act 1986, which has been approved by the federal Cabinet, will be introduced in the next session of parliament.

If nothing dramatic happens, it will be passed.

Child rights experts say the move will benefit factory owners in several northern states, where most of India's child laborers — estimates vary from 60 to 115 million — work.

The amendment will help factory owners boost their profits fourfold since children could be made to work longer hours and paid less than adults.

Though the amendment says work in family enterprises is allowed only outside school hours and during vacations, it is likely to be abused by potential employers by claiming that children are ‘actually’ their family members.

The question of why children who return home from school should work in a family enterprise must be asked as well. This will also lead to legitimizing unpaid work by girls to take care of siblings and attend to family chores.

It has been pointed out that children employed after school hours get trained in a traditional occupation at an early age. This leads to the question of why should children be engaged only in traditional occupations, when they could choose other occupations through education.Sadly, India has never had a child-friendly government. Investment in children’s health and education has been abysmal. If you thought a government with an overwhelming majority, like that of Modi’s, would be different you are mistaken. This government has been singularly insensitive to children, cutting down social sector allocations.

The persistence of child labor, and this amendment especially, is a denial of all six promises. A working child loses out on opportunities and is denied educational and vocational facilities available to other children.

Mirzapur-based Shamshad Khan, president of the Centre for Rural Education and Development Action, fears schools will be emptied out and poor children in states such as Bihar, Jharkhand and Uttar Pradesh will be back working in sheds and makeshift factories that will all go by the nomenclature of family enterprises.

"The worst-hit will be the children of Dalits, Muslims, tribal families and those belonging to marginalized communities,” he says.

Khan should know; he has been at the forefront in the battle for child rights.

“But once child labor is permitted under one guise or the other, then even a minimum level of accountability will cease to exist,” says Enakshi Ganguli Thakral of the Haq Centre for Child Rights.

India ratified the UN Convention of the Rights of Children in 1992 and was among its most vocal supporters throughout. The convention gives children the right to education and participation and leisure and play; but this amendment takes all that away from children.

This amendment is a slap in the face for the civilized world because it says: "child labor is here to stay, that is our social fabric.”

Prime Minister Modi is wasting the historic mandate he received last year to push India forward and modernize through social change. The government is good for some rich people, bad for the poor and even worse for women and children.

Sorry children, this is not your government.

Augustine Veliath, now based in Delhi, served Unicef for 23 years as its communication specialist in India. A child rights advocate, he also has contributed to several national campaigns. He has also served as media advisor to the government of India.