Indian security personnel and protesters clash following a gun battle between security forces and suspected rebels in Srinagar in Kashmir on May 5. (Photo by Habib Naqash/AFP)

India's renewed offer to hold talks with separatists to end violence in Kashmir will remain insincere until it has a dialogue with Pakistan, say those working to free the region from Indian rule.

Indian Home Minister Rajnath Singh made an open offer on May 27 to separatists to engage in talks with the government about ending the long-running conflict in Jammu and Kashmir, India's only Muslim-majority state.

Separatists are represented by Hurriyat, an amalgam of Islamic groups in Kashmir that rejects violence but works for Kashmir's freedom through talks.

The India-administered part of Kashmir has been witnessing violence for decades after Islamic groups intensified their armed struggle against Indian forces to free the region or to make it part of Pakistan.

India had earlier refused to speak to separatists on grounds that they do not have the mandate to represent Kashmiri people and talks would legitimize their existence.

However, the government of Prime Minister Narendra Modi has changed India's foreign policy since coming to power in 2014. While it has toughened military action against armed violence, it has also opened the way for dialogue with Hurriyat.

Singh said the government was ready for talks with all stakeholders in Kashmir. "If Hurriyat comes forward for talks, we don't mind talking to them. Whoever wants to talk with us, we are ready for talks," he told a TV channel in New Delhi.

The government expressed its readiness to talk to all stakeholders for the first time in September 2017. However, separatist groups remain cautious even though the government repeated the offer on May 27.

They accuse the federal government of issuing conflicting statements over holding talks with Pakistan, which separatists and militants say is a stakeholder in the Kashmir dispute.

Separatist groups held a closed-doors meeting on May 29 at the residence of 89-year-old separatist leader Syed Ali Geelani, who is calling for Kashmir's merger with neighboring Pakistan. 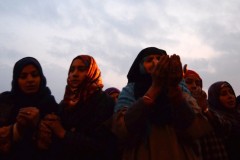 India claims violent militancy is supported by Pakistan, which already administers part of Kashmir, but Pakistan has consistently denied having any involvement in Indian Kashmir.

In a statement after the meeting, separatist groups asked the government to clarify what it wants to talk about. They refused to have any dialogue until the agenda is clarified. They also accused New Delhi of not being clear about what it wants.

While Singh is ready for dialogue with both Kashmir and Pakistan, External Affairs Minister Sushma Swaraj has said no talks would be held with Pakistan unless the violence stopped, it noted.

"If we accept the offer, it means we will raise the expectations of people and if nothing comes out of it, then history will never absolve us. Pakistan has to be taken on board if India wants to settle the dispute," said a separatist leader who didn't want be named.

The conflict dates back to 1947 when India and Pakistan became separate states after British rule ended. Both countries claim Kashmir in full and have fought three major wars and a myriad of skirmishes over it. Three decades of separatist attacks and military suppression have claimed the lives of 100,000 militants, security forces and civilians.

Nasir Aslam Wani, leader of Kashmir's main opposition National Conference party, said the government was "unnecessarily confusing everybody" and should start dialogue with all stakeholders.