Govt gives no reason for rejecting the visa renewal of Sister Enedina, who dedicated her life to the poor for five decades 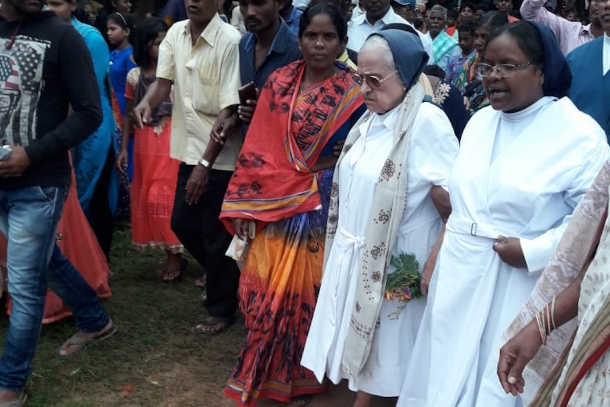 Sister Enedina of the Daughters of Charity congregation walks with villagers after they gave her a send-off. The Spanish nun left India on Aug. 20 after the government refused to renew her visa. (Photo supplied)

The Indian government has refused to renew the visa of an elderly Spanish nun who had worked for the country’s poor for five decades.

Sister Enedina, 86, from the Daughters of Charity congregation, had her visa renewal refused on Aug. 11 and was then told she had 10 days to leave the country.

The nun, who trained as a medical doctor, had helped poor people in the country’s east since the mid-1960s. She flew out from New Delhi on Aug. 20 on a flight to Spain.

Sister Martha Pradhan, head of her congregation’s North India Province, said Sister Enedina had been renewing her visa periodically ever since she came to Berhampur in 1965, but the government rejected it this time around.

“She applied online to renew her visa in the first week of August, paid the fees and completed all the formalities … we then received the notice that she had to leave the country within 10 days,” Sister Pradhan told ucanews.com. “We were not told why the visa was not renewed.”

The Federal Ministry of External Affairs deals with visa issues but maintains a policy that it denies visas without stating any reasons.

The development comes amid criticism that the government of Prime Minister Narendra Modi, which came to power for a second time in May riding on a landslide for the pro-Hindu BJP party, has been supportive of hard-line Hindu groups pushing to make India a Hindu-only nation.

Hindu groups have been demanding the expulsion of all foreign missioners from India, accusing them of using social work as a façade for converting Dalit and tribal people to Christianity.

A ministry official told ucanews.com that it cannot speak about specific cases.

“A visa, as a rule, is often denied if it is incompatible with the purpose of the visit as mentioned in the visa application of the applicant,” the official said. “The government, like any other government, believes that the right to grant visas remains the sole prerogative of the host country concerned.”

After arriving in Berhampur several years later, she opened a dispensary to cater to the healthcare needs of local people — mostly tribal and socially poor Dalit people.

Five years later, she moved to Mohana village in nearby Gajapati district and began working for the education of Dalit and tribal people.

Sister Enedina’s 54-year missionary career as a doctor, nurse and teacher forced “many in the area to consider her their mother,” Sister Pradhan said.

The provincial nun said Sister Enedina will "live in one of our houses” in Spain.

Bishop Sarat Chandra Nayak of Berhampur said he was saddened by what has happened to Sister Enedina.

“It is unfortunate that such a qualified and trained nun had to leave the country,” Bishop Nayak told ucanews.com. “It indeed is a loss. We don’t have many sisters qualified as doctors who will work in remote areas among the tribals and Dalits.”

Father Madan Sual Singh, director of Jana Vikas (people’s development), a social service wing of Cuttack-Bhubaneswar Archdiocese, said he knew the nun when he was a schoolboy.

“Her hard work for and dedication to the poor were very moving,” Father Singh said. “She would not hesitate to drive and go to the even most remote villages, risking her life where the resources were limited. She learned the local language and people naturally developed a friendship with her.”

The Daughters of Charity was founded in France in 1633 and is based on the spirituality of St. Vincent De Paul. It serves through hospitals, orphanages, old age homes and educational institutions. They are also involved in the pastoral activities of the Church.