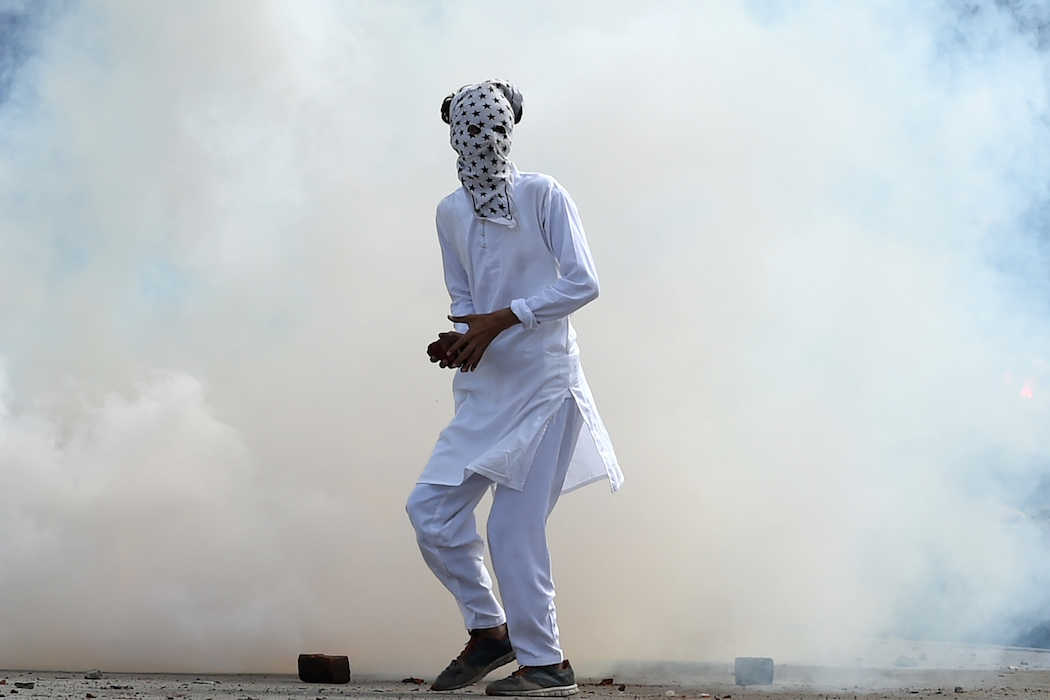 A Kashmiri youth stands during clashes between protesters and Indian forces in Srinagar on June 16. Violence broke out after Eid prayers, with police and paramilitary forces firing tear gas and pellet guns at hundreds of protesters. (Photo by Tauseef Mustafa/AFP)

The Indian government has ended the truce that it offered to Islamic militants in northern Jammu and Kashmir state during the holy Muslim month of Ramadan.

On June 16, federal Home Minister Rajnath Singh announced that the government has decided to continue fighting the militants.

"The security forces are being directed to take all necessary actions as earlier to prevent terrorists from launching attacks and indulging in violence and killings," Singh said in a statement.

The Indian army and other security agencies exercised maximum restraint during the month leading up to Eid al-Fitr, the last day of Ramadan on June 16, but militants continued to target both security forces and civilians, the statement said.

Militants are conducting an armed struggle to free the Muslim-majority region from India, either to join the bordering Islamic nation of Pakistan or to establish a free Islamic state.

Home Ministry data revealed that militant attacks increased nearly threefold during the ceasefire. Only 25 incidents took place from April 19 to May 16 but there were 66 attacks from May 17, when the ceasefire started, to June 13.

The government announced the unilateral ceasefire as "a goodwill gesture" to help Muslims observe their holy month without any disturbance, Singh had said when announcing the truce.

The government directed security agencies not to launch any offensives against rebels. Singh also made an open offer of peace talks with separatist groups.

However, both separatists and militant groups rejected Singh's offer, stating that the federal government's approach to ending conflict in Kashmir lacked clarity and sincerity. The separatists wanted Pakistan to be included in any talks.

Rafi Ahmad Mir, chief spokesman of the People's Democratic Party that rules the state in coalition with the Bharatiya Janata Party, told ucanews.com that the decision to end the ceasefire was unfortunate but the militants' response also was poor. "It should have been received positively by the militants," Mir said, regretting the increased attacks.

Owais Ahmad, a journalist covering security-related stories, said the ceasefire failed but the government's decision to end the truce was taken without any groundwork. The ceasefire gave militant groups an opportunity to regroup and channel operations, he said.

Senior journalist Syed Shujaat Bukhari was shot dead by militants on June 14 outside his office in the center of Kashmir's capital Srinagar. Bukhari was an advocate of dialogue and reconciliation, which militants see as a stand against their action.

"Through Bukhari's killing, the militants sent out a clear message that they are active and can target anyone, anytime," Owais said.

The conflict dates back to 1947 when India and Pakistan became separate states after British rule ended. Both countries claim Kashmir in full and have fought three major wars and a myriad of skirmishes over it.

Three decades of separatist attacks and military suppression have claimed the lives of 100,000 militants, security personnel and civilians.