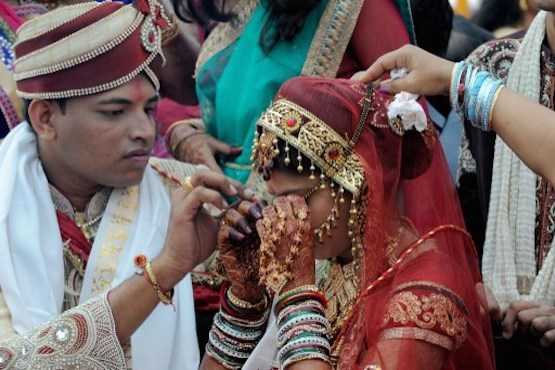 A Hindu groom assists his bride during a marriage ceremony in Ahmedabad, western India, in this file photo. The pro-Hindu federal government plans to replace religion-based personal law with a uniform code. (Photo by AFP)

A seething debate is underway in Hindu-majority India once again as the government plans to replace religion-based personal law with a uniform code.

India, known to be a secular nation, has successfully practiced parliamentary democracy for the past six decades, and has allowed its people of varied religions to follow their own faith-based codes governing marriage, divorce and inheritance.

The Indian Constitution, which declared the country a secular nation in 1950, accepted various religion-based personal codes when it was promulgated, but intended to introduce a common code in the country.

From time to time the Hindu majority country of 1.2 billion has witnessed intense debate surrounding the idea. Principle parties in the debate were India's some 216 million Muslims, and 27 million Christians — the two major religious minorities.

The debate surfaced most recently in early October when the Law Commission of India circulated a questionnaire seeking public opinion on establishing a uniform civil code in the country.

India's ruling party — the Bharatiya Janata Party (BJP) — has been pushing for such a law in the face of opposition from political detractors. Opponents of the uniform civil code link it to the BJP's pro-Hindu slant.

Muslim organizations have opposed the idea of uniform civil code on the grounds that it may end their system of polygamy and divorce. Several Muslim leaders have openly expressed fears that the move is a push for a "Hindu nation" as envisaged by the BJP.

Catholic leadership in the country are currently gauging the national mood even though they have no reason to oppose a uniform civil code as it does not affect their faith or moral teachings. The Catholic Church — the prominent Christian denomination in the country — does not accept divorce in any case and changes in law would not affect its position on the issue.

Cardinal Baselios Cleemis, president of the Indian Catholic bishops' conference, said the government's timing and priorities were wrong. The state should fight poverty and lack of education in rural villages first, and then work on the uniform personal code, he told media.

The cardinal's response reflects a general confusion among the Christian leadership on the issue. They have no real ground to oppose the government's move. But their support would pitch them against the Muslims. It is a sensitive situation.

Understandably, Cardinal Cleemis has taken a pro-Muslim stance. "If other communities feel that the uniform code would prove dangerous to them, then we are sympathetic to their fears. All of us have the right to practice and propagate our religion and there should be no system which makes us fear in for our existence," Cardinal Cleemis said in an interview.

Prime Minister Narendra Modi has promoted the new code's benefits for women. "One should not consider religion. Mothers and sisters should be respected," Modi told a rally in Uttar Pradesh state, which goes to the polls for its local legislative assembly next year.

Modi said his government would not allow the lives of Muslim women to be "destroyed" by easy divorces granted to Muslim men.

Modi's BJP government has wanted to abolish practices such as the one that allows a Muslim husband to divorce his wife by uttering (or even writing) the word "talaq" three times.

The provision is often abused and hundreds of Muslim women are divorced and left without means of livelihood in India. Moreover, unlike other religious communities in India, the Islamic practice of polygamy permits a Muslim man to be married to four women. These practices are seen as discriminatory.

India's opposition parties including the communists, socialists and the main opposition Congress Party all oppose the new code. But the BJP claims that their opposition is a political move to win votes from the Muslim community.

This appeasement of the Muslims by the Congress Party and the communists comes without a genuine desire to uplift the community and will only increase animosity against Muslims, said Yogi Adityanath, a BJP lawmaker.

Christian politician, T. Ngullie, said, "Muslim women stand to benefit from the uniform civil code. There is male chauvinism among the Muslim leadership that makes them oppose its introduction."

Such claims cannot be dismissed outright. Several Muslim organizations including the All India Muslim Personal Law Board — known for their pro-male bias — have rejected the move. They see the introduction of a uniform civil code as an "interference" and reiterate that "Muslims are completely satisfied with the existing laws."

However, there are a few Muslim organizations like the All India Ulama and Mashaikh Board, who have translated the Law Commission's questionnaire into Urdu and encouraged debate in their community.

But what really worries people about the uniform civil code is the fear that when a universal law is established, Hindu hardliners may push to establish an Hindu ideology as the basis of Indian-ness or good citizenship, equating nationality with the Hindu religion. Religious minorities fear they may become second class citizens.