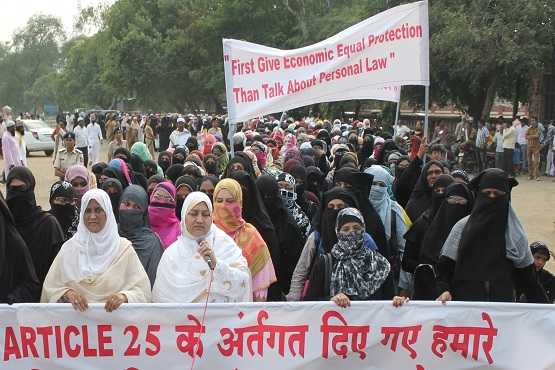 Muslim women stage a demonstration in central Indian city of Nagpur on Oct. 29, 2016 protesting against a uniform civil code in India. The government wants to end the practice of verbal divorce in the country. (Photo by IANS)

With good education, a job and loving parents, Ruksar Jaan has everything that a woman of 26 hopes for. But the thought of marriage frightens her because of the practice of triple talaq—the verbal divorce practiced among Muslims in India.

Progressive Muslims like Jaan, support India's plan to ban the practice that allows a Muslim husband to divorce his wife by uttering talaq, meaning "I divorce you” three times.

"There is always a fear that your husband could get offended at any time and divorce you without rhyme or reason," says Jaan, who lives in Srinagar, capital of the northern Indian state of Jammu and Kasmir.

The situation has worsened in India with men divorcing women over the phone, email or other social media platforms such as Facebook or Whatsapp. "I don't want to be one such divorced wife," Jaan, told ucanews.com.

A 22-year-old woman was divorced in March over the phone in Uttar Pradesh, while two Muslim women in Hyderabad, Andhra Pradesh state,  were divorced the same month by their US-based husbands via the social media platform Whatsapp.

In another incident, a Muslim woman was divorced by her husband via the phone on April 16 in Uttar Pradesh. Her in-laws poured acid on her after she refused to accept the divorce.

According to experts on Islamic sharia law, a husband has to say "talaq" three times on three different occasions in three different places to have an effective divorce, unlike what is practiced in India now. The religious law also demands that discussions be conducted between the wife and elders of the family and the word be uttered in the presence of two witnesses.

Even though triple talaq is banned in 21 Muslim-majority countries, including Pakistan, it is legal and practiced in India.

Hafeez Ahmed Hawari, a Delhi-based Muslim leader, told ucanews.com "the concept of divorce has been misused. There is no room for injustice in Shariah law," he said.

The momentum to ban the practice has been gaining ground in the country since 2016 with the pro-Hindu Bharatiya Janata Party (BJP) government seeking public opinion on the need to establish a uniform civil code in India and scrapping religion-based laws that govern marriage, divorce and inheritance.

Prime Minister Narendra Modi and BJP leaders have also been occasionally speaking about the injustice Muslim women face in society because of the triple talaq. On April 16, Modi said Muslim women are facing difficulties and deserve justice.

"If a wrong practice is being followed anywhere in society then it needs to be woken up and efforts should be made to deliver justice," he said.

However, some groups such as the Communists say the BJP's attempt to ban verbal divorce is a way of targeting Muslims and part of a plan to establish Hindu hegemony.

Communist leader D. Raja questioned Modi's concern for Muslim women and told media that he should equally be concerned about Christian and Hindu women as the personal laws of every religion in India is "biased against women."

However, Christian women leaders like Jyotsna Chatterjee, director of the church-run Joint Women's Program, told ucanews.com that the present practice of triple talaq "is anti-women and violates human rights and the Indian constitution."

However, some Muslims and groups like the All India Muslim Personal Law Board supports the practice, claiming that they have a petition signed by some 30 million Muslim women in favor of triple talaq.

Asma Zohra, chief of the board's women's wing, alleged that the move against verbal divorce is "an attempt to break the social structure of the community in the name of women's rights."

Mohammed Junaid, coordinator of interfaith forum Minhaj-ul-Quran, said the government's concern for the Muslim women was just a "political gimmick.”

"They just want to secure votes. It has nothing to do with Muslim women and their sentiments," he told ucanews.com.

Echoing the same views, Chatterjee said, "we are absolutely sure that it is politically motivated."

"The triple talaq carried out in today's time needs to be stopped. The personal law or the Quranic law regarding the divorce should not be touched. We must not interfere with the personal laws of any religion," she added.