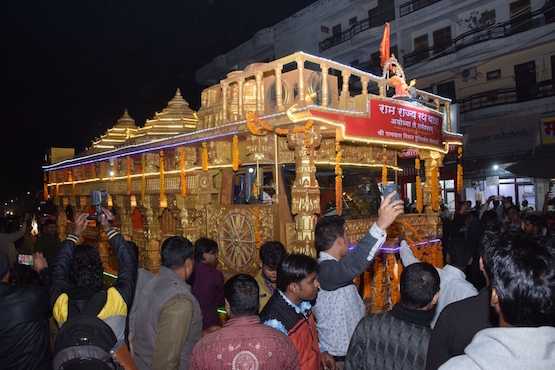 Hindu group Vishwa Hindu Parishad's chariot arrives in Allahabad on Feb. 15 on the second day of its 41-day tour to campaign for the construction of a Ram temple in Ayodhya. (Photo by IANS)

Hindu groups who have started a 41-day chariot journey demanding to build a temple on a controversial spot have been accused of raking up an emotive issue for the Hindu masses ahead of the 2019 national election.

The 6,000-kilometer Ram Rajya Rath Yatra (chariot journey for rule of Ram) that started from Ayodhya, a tiny town in Uttar Pradesh state, is due to end in the southern temple town of Rameshwaram on March 25 after passing through six states.

The Vishwa Hindu Parishad (World Hindu Council), which campaigns for a temple dedicated to Hindu lord Ram in Ayodhya, organized the event.

"As polls are slated for 2019, it is gradually becoming clear with each passing day that religion will be the central theme of the Bharatiya Janata Party (BJP) to win elections," said Parveen Mishra, a Gujarat-based rights activist.

The Ram temple has been an emotive issue since 1992 when Hindu zealots demolished a mosque there. Hindus claim Muslim invader Babur built the mosque in the 16th century after demolishing a temple that stood on the birthplace of Ram. The demolition caused nationwide riots resulting in the death of some 2,000 people and destruction of property worth US$3.6 billion.

The frenzy for the Ram temple started with another chariot march in 1990 led by the then leader of the pro-Hindu BJP. It helped the party come to political prominence in 1991 by gaining 120 seats in the 543-seat national parliament. The 1996 election saw the BJP become the largest single party with 160 seats.

The demand for a Ram temple has been revived at every subsequent election as the courts have yet to decide whether Hindus or Muslims own the land on which the mosque-temple structure stood. The next hearing is scheduled for March 14.

Mannady Hari, an organizer of the current campaign, says the aim is to garner support for establishing Ram Rajya (Hindu rule) in India.

"This campaign will make people aware of the concept of Ram Rajya and how it is inclusive and not exclusive. Whenever the politics become erroneous, it is the religion which rectifies the wrongs," he said.

The Ram Rajya concept, developed by Mahatma Gandhi, envisages a government that rules the nation based on eternal values of truth, justice and righteousness — the values with which Ram ruled his land.

But many believe the campaign aims to placate Hindu sectarian feelings ahead of the next general election, due in May 2019.

"It is certainly clear that the BJP will again contest the elections of 2019 in the name of the Ram temple. It came to power in 2014 promising an economic revolution but failed on all fronts. It is finding religious issues an easy way now to grab power once again," said Molvi Gulam Ali, an Islamic scholar in Muslim-majority state Jammu and Kashmir.

Communist Party leader M.A. Babee said the government must step in to prevent the campaign from reaching into other states in India.

"We have seen what happened when the BJP launched the same campaign in 1990 and the worst communal riots broke out in the country, claiming precious lives. We are very apprehensive about what will happen now," he said.

Iqbal Ansari, a member of the Babri Masjid Action Committee that is contesting the BJP's demands in the Supreme Court over constructing a Ram temple in place of the mosque, said the relaunch of the campaign by Hindu groups looks suspicious.

"When the BJP in 1990 held a nationwide rally, we know how people got killed and how the BJP came into existence. Now, when everything is normal, the same party has come out with new formula of divide and rule," Ansari said.

Rights groups have been accusing the BJP, which leads the federal coalition government, of fanning the flames of intolerance by dividing Hindus against religious minorities such as Christians and Muslims.