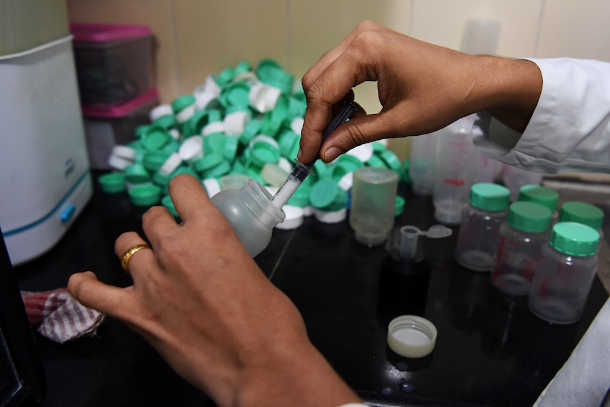 A nurse checks supplies at a hospital in New Delhi. Many Indian state hospitals lack the facilities to give decent care to patients. (Photo by Sajjad Hussain/AFP)

For the past six years, 31-year-old Muneer Ahmad has been celebrating two birthdays because he loves to remember an event that miraculously saved his life.

Ahmad was 25 when a shooting pain in his chest forced him to visit a government health center in his home state of Jammu and Kashmir on the northern Indian border.

As the center did not have electrocardiogram equipment to assess his heart, the computer engineer was left helpless, breathless and on the brink of collapse. His friend rushed him to a private hospital where he was diagnosed with cardiac arrest.

"I was operated on twice there and the medicos congratulated me for getting there in time," said Ahmad, who celebrates his "second birth" every year.

He said his experience proved that doctors at government centers do not have basic diagnostic facilities. Many poor people depend on such centers and become victims of medical negligence, he told ucanews.com.

A lack of medical facilities is the cause of death of nearly 27 percent of the nine million people who die every year in India, according to government data.

Imran Majid, a health specialist, told ucanews.com that India spends the least of all countries on its healthcare, resulting in the deaths of 7,000 people every day on average. "If we observe keenly, it is an epidemic claiming lives without anyone addressing it with any serious approach," he said.

The government's own figures show India is spending a mere 1.15 percent of its GDP on public healthcare. The global average is 6 percent, which Majid said reflects the state's laxity over the issue.

Lack of funds means a lack of doctors. Government figures reveal that only one doctor is available per 11,082 Indians. A doctor-population ratio of 1:1,000 is recommended by the World Health Organization.

Dr. Ankit Malhotra, a researcher and medical practitioner based in New Delhi, told ucanews.com that even those countries considered economically poorer than India are spending much more on healthcare. For example, the Maldives, Bhutan and Sri Lanka spend 9.4 percent, 2.5 percent and 1.6 percent of their GDP respectively.

Poor rural people are most affected by the lack of government health personnel, according to Catholic health workers.

The Catholic Church runs about 3,500 healthcare facilities including dispensaries in remote villages providing cheaper care for the poor. These facilities also network with government centers and programs.

"We have been catering to the needs of HIV-infected patients and mainly treating people living in slums and rural areas where medical care is almost negligible," Bag said.

Most Catholic facilities also provide palliative care to the terminally ill and conduct awareness camps on hygiene, nutritious food and ways to prevent diseases and infections.

In his 2016 budget speech, Finance Minister Arun Jaitley announced the National Health Protection Scheme that would give health coverage to low-income individuals. However, two years later, the proposal has yet to be implemented.

According to 2017 research done by Sanford School of Public Policy at Duke University, major federally funded central programs in India witnessed reductions in funds, raising concerns that the health sector might be receiving fewer financial resources under the current administration than in the past.

Prime Minister Narendra Modi in August announced a health protection scheme for 100 million poor families, reaching over 500 million people. The scheme offers 500,000 rupees (US$7,200) per family per year for hospitalization.

Hansal Raj, 45, who was paralyzed for three years for want of a basic medicine in a New Delhi government hospital, told ucanews.com that the government should attend to simple needs rather than giving promises for the future.

Five years ago, he collapsed on the floor of the hospital because its store did not have medicine to control his rising blood pressure. Raj, who runs a grocery shop near his house, regained full consciousness only after three years.

"Whose fault was it for not having medicine in a government hospital — mine or the government?" Raj asked.