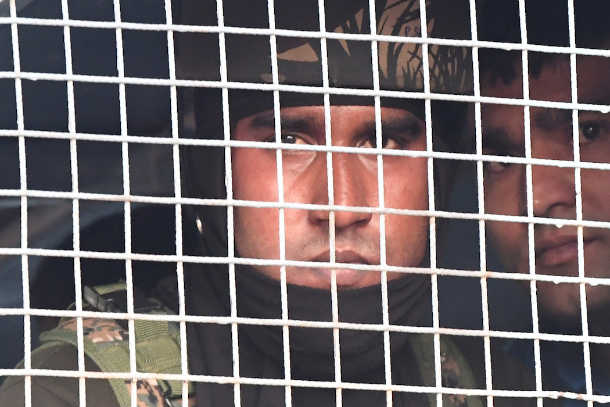 Indian soldiers look on from an armored vehicle during a wreath laying ceremony on July 13 at a paramilitary camp in Srinagar for two troopers killed recently by militants. Authorities have banned broadcasts of Islamic news and religious television programs to prevent young Muslims from becoming radicalized. (Photo by Tauseef Mustafa/AFP)

Muslims in Jammu and Kashmir, India's only Muslim majority state, have been left stunned by a federal government decision to ban Islamic and Pakistani channels in the region.

"It has become necessary and expedient in the larger interest of public and maintenance of peace and tranquility to prohibit you from transmitting non-permitted TV channels [which are not permitted by the Ministry of Information and Broadcasting, Government of India]," Srinagar's additional district magistrate said in an order passed on July 12.

"The banning of these channels is direct interference in the practicing of religion by Muslims in the Kashmir Valley," rights activist M. M. Shuja said.

A state official told ucanews.com on July 26 that the state administration, which is now directly under the Indian president, had no say in the decision as the directive came from the federal government's Information and Broadcasting Ministry.

He said the state administration is only directed to ensure the ban is enforced.

"The reason for such action is that it is felt that youth may become radicalized by watching these channels, so therefore it is a pre-emptive measure," said the official.

Local young Muslims in the region being radicalized to take up arms against security forces has been a worry for India, fighting a three-decade long secessionist movement that wants to split with New Delhi to join with neighboring Pakistan or to form an independent state.

The banned channels include several Pakistani ones but the move will render hundreds of people working with television networks jobless, Sajad Ahmad a network operator said.

"Thousands who cannot go to Mecca for the hajj due to old age watch Saudi TV [via religious channels] to get some spiritual solace. How can the live transmission of congregational prayers in Mecca radicalize locals or be a security issue?" Sajad said.

Owais Ahmad, a journalist working in Kashmir said the government was playing with religious sentiment because its reasoning does not hold water.

"The government should know that youth are lured by extremists through the internet, not through television," he said.

Kashmir's chief Muslim cleric and separatist leader, Mirwaiz Umar Farooq told ucanews.com that banning Islamic channels was an autocratic decision to undermine the sentiments of Muslim people.  "The government is trying to curb the media in Kashmir … such a step is purely undemocratic," he said.