India-Bangladesh ties are no more refugees of the past 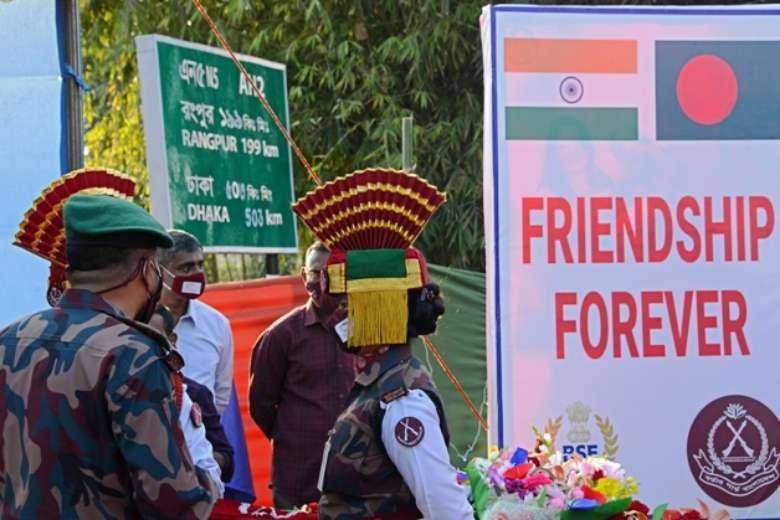 Bangladesh's Border Guards prepare to celebrate the 50th Victory Day anniversary of their nation to mark their liberation from Pakistan in Fulbari at the India-Bangladesh border on the outskirts of Siliguri on Dec. 16. (Photo: Diptendu Dutta/AFP)

The agony and ecstasy associated with the birth of Bangladesh in 1971 still hold the message that religion cannot bind a nation together for long.

Sheikh Mujibar Rahman and his Mukti Bahini firmly believed that the Bengalis in the east were different from West Pakistanis and thus Pakistan was splintered and Bangladesh came into being.

This development had a more significant and wide-ranging impact than any other comparable event in the recent history of the subcontinent, especially for India, which played a big role in the liberation of Bangladesh.

The much-hyped recent bonhomie between Prime Ministers Narendra Modi and Sheikh Hasina notwithstanding, India has inherited a perennial irritant — the Bangladeshi immigrant — that has become a political hot potato in the sensitive northeastern region, especially in the state of Assam.

This cross-border saga has all the ingredients, namely violence, bloodshed and insurgency, to keep the pot boiling.

The Indian government helmed by the pro-Hindu Bharatiya Janata Party (BJP) wants to impose the National Register of Citizens in Assam, which, if strictly implemented, could see thousands of illegal Bangladeshis return to their home country.

Diplomatically, this may seem an impractical and ill-advised solution to a festering problem.

In 1994, the then Nagaland chief minister S.C. Jamir, a Christian and a Congressman, said: “Bangladeshis are increasing like rabbits.” During the previous Congress regime in Assam, it was often said that “Bangladeshis will become the kingmakers” in the state.

Experts point to a rapid influx of Bangladeshis, both Hindus and Muslims, into Assam between 1971 and 1991. “Data shows the Hindu population declined in Assam from 72 to about 67 percent and the Muslim population rose to 28 from 14 percent,” according to Ratnadeep Gupta, a sociologist from Guwahati, the biggest city in Assam and the northeast region,

In addition, many Chakma and Hajong Buddhists had sneaked into neighboring Arunachal Pradesh and Tripura during the mid-80s, according to Indian authorities.

There were apprehensions in the Barak Valley of Assam of Muslim hegemony being established in the state with the alleged instigation of Pakistani agencies, suspected to be planning on setting up a "greater Bengal."

In July 2008, Justice B.K. Sharma of Gauhati High Court said in a judgment: “The day is not far off when the indigenous people of Assam, both Hindus and Muslims and other religious groups, will be reduced to minorities.”

The then Assam governor Lt. Gen. (retired) S.K. Sinha had even submitted a detailed report to the president of India about the “economic compulsion” in Bangladesh that was fueling the influx of thousands.

Another headache developed when insurgent groups in Assam, Manipur and Nagaland started taking shelter and operating from Bangladesh.

The Hasina regime started cooperating with Indian authorities during Manmohan Singh’s time as prime minister, helping to get hold of fugitive ULFA leaders like Arabinda Rajkhowa.

“Their camps were dismantled. This changed the game in India’s northeast. Most ultra groups have been on the run ever since or have agreed to come to the negotiating table,” said Naga politician N. Thomas Ngullie.

The Dhaka siege on July 1-2, 2016, was one of the deadliest attacks in Bangladesh. The fighter in the video, speaking Bengali and English, warned Bangladesh it was now part of a bigger battlefield to establish a cross-border “caliphate.”

Post the Dhaka siege, the terror group Islamic State too warned of repeated attacks in Bangladesh.

Security experts in Delhi treat these as serious developments, suspecting a large section of Muslims in Bangladesh has pledged support to “the Khilāfah.” These cannot be overlooked as they had always been a section of Islamic extremists in Bangladesh, they feel.

The Sheikh Hasina government might have good intentions. She may personally be secular but the security apparatus in Dhaka is pathetically incompetent to grasp and control the situation

There were reports in West Bengal of terror elements ostensibly supported by Islamic State having drawn out plans to attack Indian temple priests.

Indian agencies have been warning since 2010 that Bangladesh-based groups like Ahle Hadith Andolon, Jamaat-ul-Mujahideen Bangladesh and Harkat-ul-Jihad-al-Islami (HUJI) are turning their neighborhood into a “seedbed and activity center” for their global activities.

“The Sheikh Hasina government might have good intentions. She may personally be secular but the security apparatus in Dhaka is pathetically incompetent to grasp and control the situation. The attack on Durga puja pandals in 2021 is a pointer. We nationalists in India are concerned over such development,” said Naga leader Ngullie.

After the 2016 Dhaka siege, PM Hasina had raised the question, “Yeh kemon Musalman?”, meaning "What kind of Muslim kills innocents during the holy month of Ramadan?"

In the words of India’s Foreign Secretary Harsh V. Shringla: “I think we certainly are looking to the future. Both our countries have young populations; we are looking at dynamic growth. This is after all the Asian century. And I think we are both aspirational nations. And I think what we have achieved [in bilateral ties] is incredible.”

Both countries have come a long way in achieving synergies in connectivity, joint manufacturing, joint cooperation and “resolving intractable issues in the most amicable manner,” he said.

“I think what we have done is we have set the stage for an exponential increase in ties, and I think in 50 years, even in 10 years from now, you will see very changed countries,” Shringla added confidently.

But as they say, the proof of the pudding is in the eating.