When Arminda Morera fled her native Timor-Leste as the fledgling nation chose independence 15 years ago, she knew she was abandoning her life for an uncertain future in Indonesia.

The 60-year-old left behind land and cattle for what she hoped would be a better life across the border in Indonesia. But 15 years later, she says, her family still lives hand to mouth, struggling to pay for food, medicine and even her children’s education. It all comes down to one issue, she says: land.

“As farmers, our core problem is that we don’t have title to the land where we are now,” Arminda said. “We cannot afford to buy land for agriculture or to build permanent homes.”

Effectively, she says, her family’s financial prospects remain unchanged since arriving in West Timor as refugees. Her family lives in the same tiny wooden house where they started in Belu district all those years ago.

Arminda said she had been expecting the Indonesian government to grant land titles to her and other refugees. But after 15 years her hopes have faded. Her family still depends on the generosity of local people, who have allowed them to manage parts of their land. But she knows that generosity can only last so long.

“I’m sure the owner will take it back, sooner or later,” she said.

It’s a problem faced by many pro-integration East Timorese now living in West Timor, who have failed to see their lives improve. When Timor-Leste voted for independence in a United Nations-sponsored referendum in 1999, Arminda and her family chose to cast their lot with Indonesia.

The UN High Commissioner for Refugees (UNHCR) reported that about 250,000 East Timorese fled to Indonesia’s East Nusa Tenggara province in 1999 when the country was facing political turmoil following the referendum. More than half of this number settled in Belu or nearby Kupang district, forming tight-knit communities that mirrored their native lands back home. For three years, aid poured in from the Indonesian and foreign governments, as well as local and international NGOs. But that aid has largely dried up. Now, many former East Timorese refugees say they are facing a difficult dilemma: should they return home?

In a village in Kupang district, community leader Francisco Ximenes said more than 1,200 people face eviction because the military, which owns the land, plans to reclaim it next year.

“It's just a matter of time that the land will be taken back,” he told ucanews.com. “For those who cannot afford to buy land, where will they go? The people are in a dilemma.” 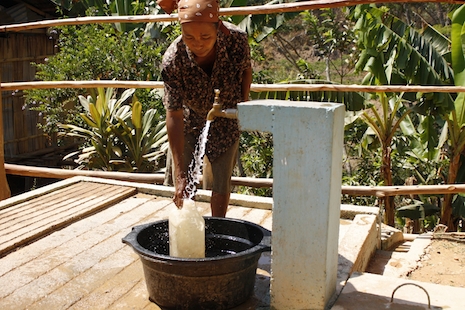 Timor-Leste faces uncertain future as Gusmao prepares to step down In Raknamo village, all the families come from Los Palos in Timor-Leste (Photo by Siktus Harson)

According to 2012 data from the Public Housing Ministry, more than 4,700 households still live in the original refugee camps spread through different districts along the border with Timor-Leste. However, many who work with and advocate for the former refugees say the true figure is likely much higher.

However, community leaders like Ximenes said such efforts may amount to a waste of money if they don’t address the core problem of land.

“Housing is not a big deal,” he said. “When people have agricultural land, they will have money and sooner or later build decent houses.”

“Land is the bloodline of the refugees,” he said. “… However, because they don't have land for agriculture, many are frustrated and are thinking of going back to Timor-Leste."

However, local officials say the government has done its best to help displaced East Timorese and that calls for free land deeds are unrealistic.

“Land ownership is a serious problem,” said Ulu Emanuel, an administrative assistant in charge of helping marginalized communities in Belu district. “Certainly, the government cannot give them land for free, because it will anger local people.”

Ulu said there are many former refugees who require serious attention — landless people still living in temporary wooden structures, with little income apart from selling firewood or vegetables. However, he added, many former refugees have also integrated themselves into the local community and transformed their lives.

Carmelita Moniz, president of Commission A of the Timor-Leste parliament, said the government would accept former refugees “with open arms”.

"They can come any time. All they [need to] do is to communicate with the village leader in Timor-Leste where they lived before, express their intent, and the leader then will report to the ministry of law," said Moniz. "They will have full rights as citizens once the ministry of law has issued a certificate indicating that they are citizens of Timor-Leste."

She also said those who return "are allowed to manage the lands they had abandoned before fleeing to Indonesia".

However, she cautioned, “it will not be the same for those who have committed crimes such as killing, burning of houses or people's properties. If their crimes are recorded and they have been convicted by a Timor-Leste court, they will have to undergo trial."

Not all former refugees want to return to Timor-Leste. Edio Casmiro, 30, lives in one of the original refugee camps in Kupang district. He agrees that his life has seen little improvement since arriving in West Timor as a teenager.

“I’m now married with my own family. But I can’t afford to build a bigger house because there’s no land,” said Edio, who lives in a cramped five-by-seven-meter home with 10 other people.

Edio said he has considered returning to Timor-Leste, but worries he will face the same conditions once he’s there.

“It means I have to start from scratch,” he said.

Deciding to return home, especially after leaving in the first place, can be a gut-wrenching choice.

“In Timor-Leste culture, family plays an important part in someone's life,” said Fr Jeffry Bonlay, a pastor in a parish that is home to more than 12,000 East Timorese. “Separation from their families and homeland in 1999 was already a painful experience, and they don't want to be separated again with any family members who are with them where they are now."

Back in Belu district, however, Arminda Morera said her family has already come to a decision. They’re just waiting for their son to finish his university studies. But their financial hardship will likely continue, no matter where they live. Arminda says her family will be forced to rely on relatives to support them.

“We plan to return to Timor-Leste,” she said. “I hope they will welcome us back."