In Vietnam, people with leprosy seek solace in Church 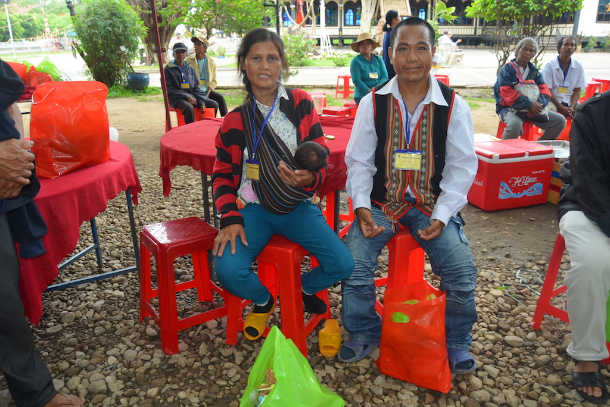 Petrus A. Thieng and his wife attend a gathering at Kon Tum Cathedral in central Vietnam on May 10. Built entirely from wood, the cathedral is considered one of the most beautiful religious relics in the region. (ucanews.com photo)

Hundreds of leprosy patients from underprivileged ethnic groups in Vietnam's central highlands were consoled with food, gifts, and cultural performances at a church-run gathering on May 10.

About 500 people afflicted with the contagious skin disease attended the special event to observe the feast of St. Joseph Damien de Veuster at Kon Tum Cathedral in Kon Tum City.

They hailed from Kon Tum province, home to the famous wooden cathedral, and nearby Gia Lai province — both of which fall under the jurisdiction of the same diocese.

It drew up a long-term strategy to help local leper communities lead more normal lives in 2011.

Father James Tran Tan Viet, who runs the local branch of the Catholic charity Caritas, said the event created opportunities for people with leprosy to comfort one another and share their stories, trials and tribulations.

They also took inspiration from the Easter message of Jesus' Resurrection, he said.

After attending a Mass presided over by Bishop Aloisius Nguyen Hung Vi of Kon Tum and five priests, the lepers played games, were served meals, and received some essential supplies including cooking oil, milk and sugar.

They were also given vouchers worth US$10 each to buy clothes, soap, and other domestic supplies.

They spent time interacting with one another, and watched dances, folk songs and traditional music instruments performed by volunteers.

Petrus A. Thieng from Kon Hring Parish said the gathering was a rare opportunity for him to meet other people in the same boat and visit the cathedral.

"We are very grateful to the Church for giving us big meals, food and gifts. We feel loved, respected and comforted here," the father of nine said, adding he often felt isolated by his fellow villagers due to the rampant fear of and discrimination against lepers.

Thieng, 45, said leprosy has hobbled his feet so he mostly stays home and looks after his children, rendering him unable to earn a living. The government gives him a monthly allowance of 400,000 dong (US$17).

His wife, who arrived at the gathering carrying their youngest child on her back, is the family's sole breadwinner. She works on local farms to put food on the table, she said.

As the couple can't afford to pay for all of their children's studies, they send some to a church-run hostel, she added.

Ro Cham Benh, a Christian from Ia Grei village, said Saint Paul de Chartres sisters often visit him and the other 14 lepers in his community to dispense medicine and provide comfort.

Benh, 56, whose hands and feet are malformed, said the gathering brought patients together from disparate backgrounds. Eleven patients from his village were invited.

Vicar General Peter Nguyen Van Dong said the diocese is home to many ethnic groups and serves over 1,000 lepers.

Father Dong, who has spent decades working with local people, said patients are given medicine and food and taken to hospitals for care and treatment when needed. Their children get scholarships to attend public schools, he added.

Meanwhile, church workers help this ostracized group survive by building them houses, digging wells, so they have access to potable water, and providing capital so they can cultivate crops and raise poultry for a living.

The 79-year-old priest said ethnic minorities in the region are mostly uneducated and are often treated unfairly and even swindled by the dominant group, the Kinh people.

Many small villages have scant access to health care and clean water, he said.

Bishop Vi said he urges those with leprosy to follow strict regimens, take their medicines regularly, look after one another and strive to keep their houses and villages clean to prevent the disease from spreading, along with other infectious diseases like cholera.

He also rallies volunteers to be positive role models and serve as the "light of the world," in emulation of the diocese's patron saint, St. Damien.

The Belgian priest ministered to leprosy patients in Hawaii in the 19th century until he died of the disease in 1889.