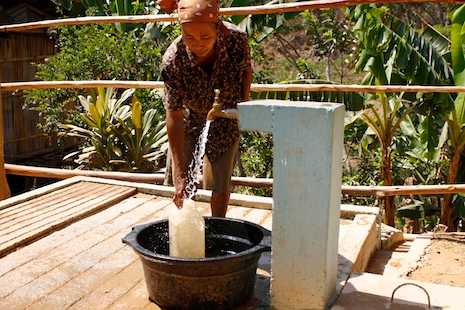 Without access to clean water, Juliana Martines De Araujo’s family has suffered immensely over the past 33 years. Five of nine children died within their first few months, and another son has been confined to a wheelchair for years since contracting a severe stomach illness.

Until recently, an average day included four hours spent traveling back and forth to collect river water in heavy jerry cans that were parceled out for cooking, washing and bathing.

But after more than three decades, water has at last come to Aileu district’s Seloi Kraik village, located about an hour-and-a-half from the Timor-Leste capital of Dili.

“My son now looks happier than ever. He looks cleaner and his face is radiant throughout the day, since the water came to our house,” said Martines De Araujo.

“Now we are all very happy, because we don’t worry anymore about where to get water for cooking, washing clothes or plates.”

In July, Martines De Araujo became one more among roughly 20,000 people in Aileu, Bobonaro and Baucau districts to gain access to a water tap, thanks to a mass installation being undertaken by World Vision.

In just a few months, the impact has been noticeable. Toilets have flourished in an area where open defecation was common and residents report improved health.

"The good thing is that now people are starting to make use of the water such as for the kitchen, garden and toilet," said Lourdes Mendonca, 45, from nearby Asumau village, who used to trek a kilometer to the nearest water source.

“Before, people lived an unhealthy life.” Poor access to water and sanitation, however, is still a nationwide problem. All districts of Timor-Leste, particularly rural areas, regularly face water crises. In the countryside, water is most often fetched from rivers, which in many cases are contaminated by mud and animal or human feces.

Even in Dili, poor water access is a common problem. At Finantil High School, water has been shut off for years, said teacher Atanasio Pinto. There are no working toilets and lessons on proper hygiene miss the mark.

“Can you imagine that even in the state capital access to water is still a problem?” Pinto said.

More than 40 percent of Timor-Leste’s 1.2 million population lives below the poverty line, in conditions where access to clean water and sanitation are often nonexistent.

“If you go to remote villages it’s hard to find any health infrastructure. And you can hardly find clean water or sanitation facilities,” said Daniel Murphy, an American doctor and founder of the Bairo Pite Clinic — a nonprofit center that provides free healthcare to the nation’s impoverished population.

An estimated 300,000 Timorese have no access to clean water, according to Murray Boardman, project quality manager of World Vision East Timor.

“Clean water is a big issue here in Timor-Leste,” he said.

“We find many similar cases in all the districts, where pregnant women have to walk for kilometers to wash their clothes and carry jars of water. It certainly affects their pregnancy,” he said.

According to the latest Unicef report, released in 2012, Timor-Leste still has the highest rate of under-five mortality in the Asia-Pacific region.

Of the 6.9 million deaths of children under five that occurred acros the globe in 2011, almost two-thirds or 64 percent were caused by infectious diseases and conditions such as pneumonia and diarrhea. The report describes these as “diseases of poverty” because of their close association with factors such as poor home environment, malnutrition, and lack of access to health services. While access to clean water makes up one of the UN's Millennium Development Goals, Timor-Leste’s Ministry of Finance admitted in September it was not on track to meet its targets next year.

But the government has made inroads in improving access to clean water and says they will build 400 water systems by 2017, in cooperation with international agencies and NGOs such as World Vision, Plan International, Mercy Corps, JICA, the Red Cross and others.

In its 2011-2030 strategic development plan, the Timor-Leste government promises 24-hour piped water supply and sanitation to households in all districts.

Many, however, say the government is doing far too little to promote clean water.

Mericio of Luta Hamutuk said the water crisis in Timor-Leste is heavily linked with poor leadership. Last year, the government allocated more than US$10 million to fund water projects in all districts, but scant results have been seen.

According to Luta Hamutuk research, 70 percent of funds allocated for any project are skimmed or lost in the process. Only 30 percent reach the contractor.

“The water problem is a problem of leadership. There is no political will, no commitment, no strong will to improve people's lives,” Mericio said.