In the Vatican, the pope has many 'masters' 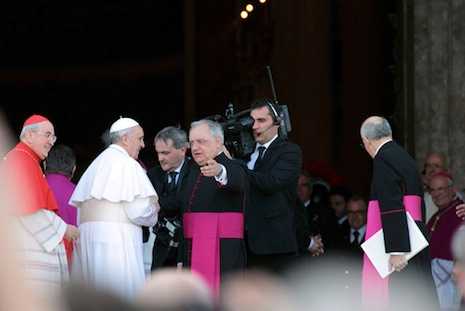 It's clear to everyone by now that Pope Francis likes to pick up the phone and call old friends. Argentine journalist Jorge Milia was on the receiving end of a recent call from his former teacher, Jorge Bergoglio, and Milia's report on that conversation makes for fascinating reading. (Hat tip here to my Italian colleague Lucio Brunelli.)

Milia recounts that in their phone conversation, Pope Francis spoke endearingly about Pope Benedict, whom he calls "el viejo" -- literally, "the old man," but a term that carries with it affection and respect.

"Today I was with el viejo, and we talked a lot. It's a pleasure for me to exchange ideas with him.... You can’t imagine the humility and wisdom of this man,” the pope told me.

“Well, then keep him close to you,” I replied.

“I wouldn't even consider giving up the counsel of a person like this, it would be foolish on my part!”

Milia tells Francis that people view him as more approachable than his predecessor, and that Francis gives the impression that people can come up and speak to him. The pope replies:

“And why not? Certainly, they should be able to do that! It’s my duty to listen to them, to pray with them, to hold their hands so they feel that they’re not alone.”

But the pope adds that not everyone around him at the Vatican can easily accept this.

“It’s not easy, Jorge, here there are many ‘masters’ (padroni) of the pope, and with a lot of seniority in years of service.”

The pope went on to say that every change he’s introduced so far has cost him great effort. He said the most difficult battle was in maintaining some management of his own agenda of activities, instead of having it imposed on him. For that reason, he said, he chose not to live in the formal papal apartment, because many popes have become “prisoners” of their secretaries.

Full Story:"Here there are many 'masters' of the pope"