In the matter of the Philippine president's tirades against the church, the bishops see things as the faithful do 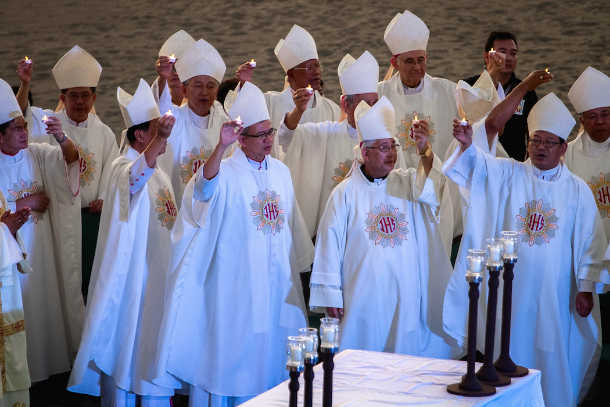 A Philippine Catholic bishops' meeting later in January will be an opportunity for the country's church leaders to issue a collective statement on President Rodrigo Duterte’s verbal attacks. (Photo by Mark Saludes)

Catholic bishops in the Philippines have largely been silent in the face of President Rodrigo Duterte's repeated attacks on both clergy and doctrine.

The closest the bishops' conference has come to an institutional response was when its president issued a statement last November defending a bishop that Duterte had falsely accused, by name, of a crime.

"Many, including myself, are saddened and disturbed by the recent statements made against Bishop Pablo Virgilio David," the three-paragraph statement written by Archbishop Romulo Valles of Davao began.

The expression of concern in the first paragraph was followed by a defense of Bishop David's integrity in the second: "Very many of us bishops have come to know Bishop David as a very good bishop, a dedicated shepherd and father of the flock in the Diocese of Kalookan." The third called for prayers for the prelate.

Bishop David heads a diocese that includes what used to be called "ground zero" in the campaign of extrajudicial killings that have shaken the country to its core.

He has been one of the few bishops to speak plainly about the Duterte government's role in the killings or to challenge Duterte's attacks on the church.

Others include Archbishop Socrates Villegas of Lingayen-Dagupan, Bishop Ruperto Santos of Balanga, Bishop Arturo Bastes of Sorsogon, Manila Auxiliary Bishop Broderick Pabillo, and Bishop Emeritus Teodoro Bacani of Novaliches; there may be perhaps one or two more. This total makes up only about five percent of the 130 active or honorary members of the Catholic Bishops Conference of the Philippines.

Duterte's dismissive description of God as a "stupid God" last June took a toll on his popularity, bringing his ratings down to their lowest level; a subsequent survey found that an overwhelming 83 percent deemed his remarks "vulgar." (The same survey also canvassed public opinion about his flippant statement, that the high rape incidence in his hometown of Davao was explained by the presence of many beautiful women living there; 63 percent found it similarly vulgar.)

But his ratings have since recovered, and he has ramped up his attacks not only on the clerical abuse crisis, but also on doctrine. He mocked the mystery of the Trinity, and called the crucifixion "unworthy of belief."

The bishops have not responded directly to the president's attacks on church doctrine. Their semi-annual meeting later this month gives them the opportunity to issue a collective response, perhaps a pastoral letter that will ease the concerns of Catholics through a forceful restatement of the bases of Christian faith. Whether they issue such a statement, or not, is an open question.

The most famous pastoral letter in Philippine history was the "Post-Election Statement" of Feb. 13, 1986.

Six days after the presidential election contested by Ferdinand Marcos and Corazon Aquino, the bishops declared that, in their "considered judgment … the polls were unparalleled in the fraudulence of their conduct."

After listing the modes of fraud and irregularities that slanted the elections in favor of Marcos, they then drew the inevitable (and, for many Filipinos of that generation, unforgettable) conclusion: "According to moral principles, a government that assumes or retains power through fraudulent means has no moral basis. For such an access to power is tantamount to a forcible seizure and cannot command the allegiance of the citizenry."

Several bishops who signed that pastoral letter 33 years ago are still members of the conference, though many of them are already emeriti. But Archbishop Valles, like the three conference presidents before him, belong to that cohort of bishops appointed in the late 1990s or the early 2000s by Pope St. John Paul II.

The conference's composition now is markedly different from that of 1986.

In 1986, the bishops asked Catholics to form their own judgment on the elections, and to come together they saw things as they did. The silence of the current conference may reflect the opposite dynamic: In the matter of Duterte's attacks on the church, the bishops see things as the faithful do.

At gatherings of the faithful, in forums, on social media timelines and comment threads, or in conversations with clergy, I can discern at least five factors that, individually or in combination, help explain the Catholic Church's silence.

Those who are sympathetic toward the church hesitate to criticize Duterte or defend the doctrines of their faith because they are acutely conscious of the church's own shortcomings. The sexual abuse cases, in particular, are having a restraining effect on any potential response to Duterte. "Have we cleaned up our own house?" is a common theme.

They have also learned to emphasize the Christian turning of the other cheek, rather than the examples of righteous anger found in the Gospel or especially in the letters of St. Paul. This martyr's attitude fits right into Catholic practice in the Philippines — it's a potent mix of "Let it be" and "their day will come."

Those who are sympathetic to Duterte but remain devout believers refrain from defending their faith because they see their president has a point: Clerical abuse has in fact also stained the Philippine Church.

Church officials have been officious. As one reader wrote: "Priests should also start living simply and humbly, like Jesus. No need for fancy cars, air-conditioned churches, and an archbishop's palace. Jesus had none of these."

They also refrain from defending their faith because they imagine Duterte is making a larger point. In their view, the president is reforming society, and the work requires the occasional use of language that will shake institutions to their foundations, including that of the church, which an eminent priest described as "still mainly middle-class."

Or to quote an erudite educator: Responding to Duterte's abusive language and offensive criticism is "missing the point."

There is a fifth factor, shared by those who are offended by Duterte's attacks and those who are not. Many people are simply reluctant to confront Duterte because he remains popular, reacts like a bully, and continues to have a social media army and a government information network ready to do his bidding.

The media environment is not as hostile as it was in Duterte's first years, but it remains a forbidding place, like the "darkest valley." Consider the conference statement defending David against Duterte's attacks; it doesn't even mention Duterte.

In the comprehensive light of the church's own teachings, these five arguments sound like the sheep are truly lost.

The open question facing the country's Catholic bishops this month, then, must be rephrased this way: What would a good shepherd do?

John Nery is a senior journalist from the Philippines. He reports on politics, history, the church, and the rule of law, and tracks the South China Sea disputes and climate change issues. He writes for the ‘Philippine Daily Inquirer' in Manila and ucanews.com.