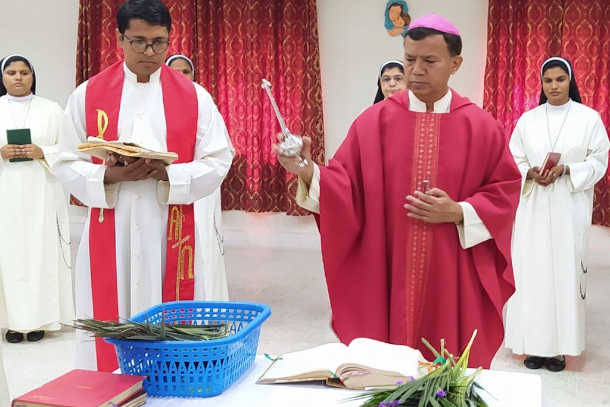 My family spent their first Easter without attending Mass at a church. All churches in Pakistan were closed to guard against spreading the coronavirus. The experience was more emotional than I was expecting.

We were among 160 viewers watching the Easter Eve service streamed live on the Facebook page of Catholic TV, which is owned by Lahore Archdiocese. Archbishop Sebastian Shaw and a dozen worshipers, most of them nuns, lit the Easter candle in a hauntingly empty compound of Sacred Heart Cathedral.

“It’s a different kind of happiness. The pandemic affected our prayer services but God saved us. Some people, gripped by grief and fear, are storing rations amid the food shortage. It is our duty to spread hope and happiness,” said the archbishop.

The ritual kissing of the crucifix was replaced by the faithful kissing their own rosaries. We kept a water bottle near our laptop as the archbishop blessed Easter water. My wife sprinkled it on family members and the front door so that the pandemic would “pass over.” She sobbed silently as the prelate concluded the Mass by blessing those watching at home.

This was the first time that churches had been ordered to close in the Islamic republic at Easter. The pastoral team of Sacred Heart Cathedral celebrated seven Easter Masses last year due to a constant influx of “rice Christians” donning their Eid dresses. The memories of past Easters felt like several films projecting onto a silver screen at the same time, overlapping each other.

Churches had been shut down even before Prime Minister Imran Khan declared a national lockdown last month. Archbishop Shaw has held daily online prayers at the bishop’s house to help those fighting the virus that has infected 5,496 in Pakistan with 93 deaths.

“Why worry? Churchgoing is not prohibited. Each house has been asked to become a church,” stated the media coordinator of Punjab’s Human Rights and Minorities Affairs Department in a Facebook post.

One of the positive aspects of the Covid-19 crisis is the revival of the Church’s most underrated ministry. Resurrected Facebook pages helped parishes in celebrating the resurrection of Christ.

A government directive forced the Church to go online. Inter Mirifica, the decree on the media of social communications promulgated by Vatican II, outlines the only means of survival for minority faith groups. Fear of terrorists raised church walls in the past; fear of infection has closed its iron gates now.

There is no doubt that the local Church will look different once the health crisis is over. The bishops’ view of their flock will change as we survive the post-virus world. In the past two weeks, Caritas Pakistan has uploaded six awareness videos on its latest YouTube channel.  The previous channel was dormant for two years.

“Despite broadcasting from five churches live from our Facebook page, we are still getting phone calls from many parishes. Our subscribers have multiplied since the lockdown last month. Church leaders have never been so serious. The archbishop himself calls our team,” Catholic TV director Jasber Ashiq told me.

The channel nearly closed in 2018 after the archbishop warned its crew that the diocese could no longer afford to finance it.

However, the online venture is not without a few shortcomings. The mobile phone of the cameramen at the Easter vigil at the bishop’s house in Lahore kept vibrating for two hours, making my kids smile. The live Mass of Bishop Indrias Rehmat of Faisalabad suffered from unnecessary intervals. The prayers, which started with 372 viewers, ended with only 62.

In an advertisement on social media, Archbishop Joseph Arshad, president of the Catholic Bishops' Conference of Pakistan, announced that the Easter celebration in Islamabad-Rawalpindi Diocese would be transmitted live on Pakistan’s state-run news channel PTV. However, PTV only aired two nine-minute clips of his Mass.

The job is not easy. The crew of Catholic TV were stopped at several police checkpoints on their way back to the studio after their coverage of Easter midnight prayers. Punjab’s government has enforced a law that prohibits public gatherings and restricts unnecessary movement in cities. A meeting of the cathedral’s security team with officials and traffic police could facilitate their movement during the lockdown.

The bishops could also help Catholic TV, which has faced a staffing crisis in Lahore and Faisalabad dioceses. More studios would help to provide better coverage even after the coronavirus crisis.

Another most important development would be coordination between church publishing houses and media ministries. As a board member of Radio Veritas Asia Urdu Service, I have been making this demand for several years. The church must pool its resources and gather different talents to reach out to the faithful who cannot participate in church gatherings.

The same goes for church commissions like Caritas Pakistan and the National Commission for Justice and Peace. Duplication will only harm the Church’s mission to reach out to deserving families. Online meetings and better use of technology can help in saving both lives and faith.