In Sri Lanka, a monk's death unites Catholics and Buddhists Sri Lankan Army personnel keep vigil at the coffin of Venerable Maduluwawe Sobitha Thero, who died in November. Church leaders have also paid tribute to the monk, calling him a beacon of interfaith harmony. (Photo by Ishara S. Kodikara/AFP)

Sri Lankan church officials paid a rare tribute to an influential Buddhist monk who died in November, calling him an inspirational figure who promoted religious harmony in an often divided country.

Venerable Maduluwawe Sobitha Thero, who supporters say played a key role in changing Sri Lanka’s political landscape, died Nov. 8 in Singapore, where he was receiving treatment after heart surgery. He was 73.

On Nov. 23, Catholics in Sri Lanka paid tribute to Venerable Sobitha with a memorial service at St. Thomas’ Church in Kotte, Colombo. It was a rare tribute in Buddhist-majority Sri Lanka, which has lived through a 26-year civil war and seen attacks on churches and mosques.*

However, Catholics who knew Venerable Sobitha spoke of a man who transcended the faith divide. The Buddhist monk worked closely with the local church and priests in his neighborhood.

"[He] talked straight despite political or color differences," said Father Leo Perera, a priest who attended the Nov. 23 service. "The monk showed how we can be involved in social and political activities without getting involved in politics or being carried away by political parties."

Asked why Catholic priests have traditionally been reluctant to play such an outspoken role, he replied: "We have a minority complex."

Venerable Sobitha was known for speaking out against corruption and for challenging his country’s leaders at at time when Sri Lankan presidents wielded significant power.

In the lead-up to the country’s January presidential elections, Venerable Sobitha and his organization, the National Movement for a Just Society, took a risk by backing an alternative candidate against Mahinda Rajapaksa, the powerful incumbent. Rajapaksa lost his seat in a surprise defeat, beaten by his challenger, Maithripala Sirisena, seen as a reformer who ran on a campaign promoting ethnic reconciliation. Observers saw Venerable Sobitha’s support as a crucial part of the victory. Venerable Maduluwawe Sobitha Thero, holding a microphone, speaks at an April demonstration in Colombo. The monk, who died on Nov. 8, was known for his willingness to challenge powerful political figures. (Photo by Quintus Colombage) 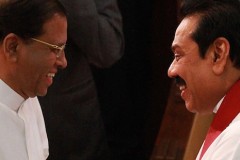 Offering an example of how the monk worked closely with the church, Venerable Anuruddha said that the temple willingly provided parking spaces for churchgoers during major events, while the church reciprocated the gesture as well.

The Nov. 23 memorial service itself was an example of two faiths coming together — a fact noted in mainstream Sri Lankan society.

The Daily Mirror, a leading English-language newspaper, spotlighted the service in an Nov. 24 editorial, calling it "a major step toward interreligious dialogue and unity."

"One of the priority goals in Venerable Sobitha’s vision and mission for a new Sri Lanka was multiracial, multireligious and multicultural unity in diversity," the editorial stated. "He spoke out sincerely and strongly for people of all races and religions to respect, promote and even celebrate diversity."